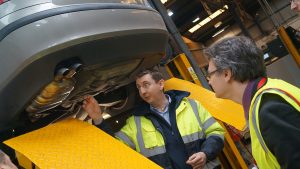 “We’d like to invite any and all of your readers to see the plant and we can show them exactly what we do and what our processes are,” Klarius’ Business Development Manager Paul Hannah said to us after we had concluded our tour of the Cheadle production site.

Klarius is on a PR drive, and there is a reason why. The Directors are facing a charge relating to selling catalysts and DPFs with incorrect type approval numbers. Whether or not this was done knowingly is up to a court to decide when the case comes to trial later in the year, but right now, new MD Mark Brickhill has the task of showing us exactly what the company produces today.

On our visit we were shown around by Brickhill, someone entirely new to the company and as we discovered, a man whose enthusiasm for improving processes and the corporate culture in British manufacturing was infectious.

Brickhill, who previously held senior roles at Goodyear and Turtle Wax, was keen to emphasize that his role was to put in place processes that mean happy staff and satisfied customers. “Customer, team, execution have always made for a successful business. Once you compromise on these things, you are going to trip over,” he said, adding that one of the first things to do on joining the company was to put together a plan for the next three to five years, during which he plans to take the company to a £50m turnover with a 10 percent EBIT margin, a target he describes as ‘not an outrageous number, but is broadly double the turnover and double the profitability that we had in 2017’.

To achieve this, Brickhill reviewed every process across the business and used feedback from customers and staff on the areas to improve. As a small example, boards found around factories that use the Kaizen method have for years had illustrations of good vs bad practice, but Brickhill has redesigned the boards on the production floor so they show things that merit a ‘yellow card’ or a ‘red card’ metaphor. It goes further than rugby metaphors around the plant though. “You are never going to delight your customer if you don’t have a fantastic team of people focussed on that as a key objective,” he yelled, over the noise of exhaust pipe production. “I think the most important thing a leader can do istosetoutaclearsetof directions that everyone can understand. There are two parts to it. One is the business plan and the other is the culture of the company,” he furthered.

Throughout his career, Brickhill has been keen to look at problems in an unconventional light. For example, when he was appointed European MD at Goodyear one of the issues he was faced with was the issue of lacklustre sales of heavy truck tyres. Rather than simply telling his reps to go out and try harder, he developed a new marketing campaign entirely. “We called it ‘free tyres’ because the better rolling resistance of our product meant that over the life of the tyre, it would more than pay for itself,” he said. The strategy worked and profitability increased.

Walking through the site, the KMT production area was busy making some sort of enormous jig, similar in appearance to one of those car rollers used for DIY car restoration, but painted bright yellow and about 60 feet in length, apparently used in the production of railway carriages. This is the heaviest of heavy engineering and the production ‘line’ such as it is can be configured to make any number of heavy tools. Other than heavy rail, clients include manufacturers of earthmoving equipment and ship builders.

Moving through the plant, the R&D department is housed in another building, and an area that the management are particularly keen to show us. On our visit, a Skoda Octavia was on the ramp having a new OE exhaust system tested, presumably to benchmark its performance against the aftermarket unit in development. Brickhill was keen to stress that the VCA inspector was in ‘almost every week’ and that all new to range exhaust systems are type approved as is required in most of continental Europe. The CAD team were busy drawing up the new reference so it can be uploaded to the electronic catalogues.

The company also has use of a piece of private road that winds around an adjacent area of farmland. While it might be an overstatement to call it a ‘test track’ it is nonetheless a useful way of trying new products for fit and rattles etc.

After the briefest sight of the sun, it was into the main factory where exhaust systems are produced. A substantial investment has been made over the past eighteen months in hardware for rolling and bending steel tube, and the changes needed around the factory to accommodate new machinery gave Brickhill the opportunity to implement various changes to the factory and to the production method after scrutinizing every aspect of a time and motion study. “If you don’t aspire to an exceptionally high standard, you might have something that is functional, but is it excellent and great? That’s the challenge” he said. The factory, in common with other comparable businesses, is now able to make product in extremely small batch sizes if necessary, meaning that on some occasions products can be picked for delivery

within hours of being fabricated.

From a logistics point of view, exhausts are the poster child of ‘ugly’. Spindly, pokey, easily crushable with lots of loose parts, the products are difficult to store and transport. To this end, the firm established its own delivery company, AutoLogistiks, a few years back to get the products where they need to be overnight, and in the condition they are supposed to be in. On our visit, transport managers were busy loading various vehicles with stock. We didn’t want to disturb them, so we moved to the final building of the complex, Emissco.

While we were aware that the company’s Emissco arm produced a number of chemical products, such as brake cleaner and maintenance spray, we didn’t realise that they are developed and canned on site. “It’s massively exciting,” said Brickhall as we looked around the canning plant. Setting up an

installation such as this requires the line to run for as many hours of the day as possible to get ROI, so it wasn’t surprising to see other brands’ products being produced under contract. However there is, as Brickhill enthusiastically told us, ‘plenty of scope for expansion’, so talks with more clients are ongoing.

While simply mentioning the name of this company makes some in the industry bristle, there is no doubt that thanks to the work of Mark Brickhill and the team, the company as we see it in front of us today is committed to producing decent, British engineered products. But there is no reason why you should take the word of a magazine writer with little technical knowledge. We’d suggest the cynical take up Paul Hannah’s offer of a plant tour and then you can make up your own mind.