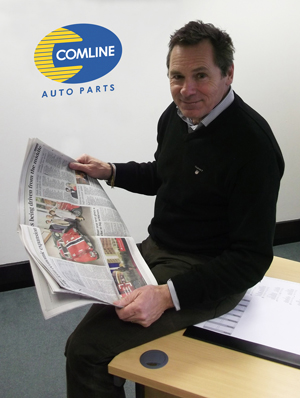 Luton-based Comline Auto Parts has been named as one of the fastest-growing mid-sized private companies in Britain, says financial house Investec.

The Mid-Market 100 ranking calculates the average annual growth of UK-registered companies over the last four years, who turnover more than £10 million per year, as only six automotive companies made it into the rankings.

Comline’s average annual growth rate was calculated at 29.7 percent with a profit margin of 4.6 percent, which saw the Luton-based aftermarket supplier ranked 58th in the listings.

Malcolm Rosher, Sales and Marketing Director at Comline, said: “Being named in the Investec Mid-Market 100 is a great honour for all at Comline and recognition for the considerable success the company has achieved in recent years. Our presence on this list further emphasises Comline’s position as one of the fastest growing automotive brands in Europe.”

Ed Cottrell of Investec added that Mid-Market 100, carried out by Duedil, indicates the size, health and size of UK’s mid-sized companies, and that the mid-market contributes nearly £1 trillion of revenues annually and more than a quarter of private sector employment.

“We know from our experience of working with mid-sized businesses that they are highly committed to investing for long-term growth and play a crucial role in the success of the UK’s broader economy. We look forward to seeing these companies go from strength to strength in the future and congratulate Comline for achieving their place in this year’s Investec Mid-Market 100,” said Cottrell.