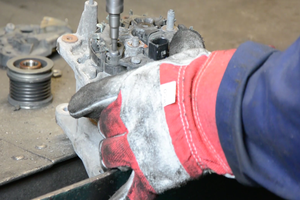 These are challenging times for our industry, with consolidation showing no signs of slowing down, along with concerns about the ‘B-word’ and the economy in general, business captains have their hands tightly on the rudder trying to navigate these choppy waters. Unfortunately, uncertain times usually result to price wars which can lead to ‘buy cheap’ sell for ‘as much as possible’.

This has led to a massive growth in ‘white box’ and ‘plain label’ products to the detriment of established, and, often, British brands, with the cheapest option being Far-Eastern copies. This trend is decimating the remanufacturing industry, since being so labour-intensive, it cannot compete on price, and distributors do not have to worry about surcharges and control of old-core.

The result has been the loss of a complete industry in the UK, along with jobs and the support industry behind.

Remanufacturing is no longer an ‘under the arches’ operation; it is a highly-technological and professional industry requiring skill, knowledge and investment. In addition to producing equivalent to or better than original equipment (OE) specification products, it has significant environmental credentials, which should be a major concern to all, so that we can protect the earth and its resources for future generations.

The basic raw material is the old part which would normally be scrapped. However, in the remanufacturing process this is fully stripped and re-worked with all wearing, faulty and parts prone to failure being replaced. The finished product is then tested to at least OE specifications using the latest computerised test equipment to ensure that it meets the strict performance levels, before being packed and ready for sale. Each remanufactured part usually has at least a one-year warranty with many companies, such as Autoelectro, offering an extended warranty.

Generally, the total remanufacturing industry in the UK employs over 50,000 people, contributes around £2.4 billion to GDP with the potential to increase to £5.6 billion, recovering around 270,000 tonnes of materials, saving an equivalent 0.5% of total UK carbon emissions compared to new equivalents.

This includes products as diverse as washing machines, ink cartridges, computers and boilers: the environmental impact can clearly be seen. The automotive industry is considered to be one of the most environmentally-aware manufacturing sectors.

A number of EU directives, driving a shift in business practice, can be seen to have contributed to this awareness. In 2002, the EU introduced the End of Life Vehicle Directive, which requires vehicle manufacturers (VMs) to reach the new vehicle goal of reusability and/or recyclability of at least 85%, and reusability and/or recoverability of at least 95% by weight, if measured against the international standard ISO 22620.

The need to consider the recovery of a product’s traditional disposal is required to combat the environmental damage caused by the discarding of end of life products. Product recovery can be used to minimise the demand for energy and raw materials and the environmental impact of waste. Product recovery proposes that the management logic of the system is changed from an ‘open’ production system to a ‘closed’ one of variable length, as demonstrated below.

The open loop describes a process which starts by taking resources from the ecosystem. The raw materials and energy are channelled into the transformation process, and, finally, the process ends with landfill disposal or incineration process.

For this situation to be sustainable, the consumption of natural resource needs to be lower than the ecosystem’s ability to regenerate them. By contrast, in the closed loop scenario, supply chain recovery activities are undertaken which delay the product disposal by starting new production cycles on the product, before treatment and disposal.

Remanufacturing is currently playing a significant part in the sustainability and economics of the automotive industry. European regulations for end-of-life have forced VMs to consider recycling when designing new models and remanufacturing is helping to meet environmental targets in relation to greenhouse gasses and preserving the earth’s natural resources by reusing them, rather than just sending unwanted material to landfill sites.

Also, as more new technology is being incorporated into modern vehicles, components are becoming more expensive due to their complexity and, sometimes, as a result of the materials used in their construction, such as platinum, palladium and rhodium in catalytic converters. Remanufacturing of these components preserves the precious metals used and can offer a significant saving over a new replacement component. A good remanufactured part will perform as well as, if not better than the original part, since any design faults will be engineered out ensuring the reliability of the finished remanufactured part.

However, remanufacturing is also facing significant challenges from the changing technology. This is due to the continual investment required and the lack of information available to independent remanufacturers. Also, changes in drivetrain technology to electric and hydrogen fuel-cell may mean that, moving forward, there are not as many wearing parts to remanufacture.

Calling on the government to act

Currently, remanufacturers supplying the automotive aftermarket are facing competition from cheaper quality copy products, which are driving prices down and affecting the overall viability of the remanufacturer. There is clearly a case for government intervention, as it is in the national interest to support remanufacturing due to its green credentials in helping to meet national and international environmental targets.

There also needs to be a strong independent remanufacturing industry to ensure that the original equipment manufacturers do not establish a monopoly, which is not in the interest of the consumer or the automotive industry, in particular, the automotive aftermarket.

Many people now consciously look at the environmental issues when replacing personal vehicles, so our ‘Captains of Industry’ need to consider the implications of their purchasing decisions when selecting parts to stock in their businesses. We all have a duty to future generations to protect the environment, and the UK remanufacturing industry is well-placed to serve the sector, being able to accommodate short production runs and offer cost-effective replacement parts, particularly for less popular applications.

Autoelectro is leading the way for UK-based remanufacturing, having invested heavily in remanufacturing processes, some of the most advanced test equipment in the world and an industry-leading website, which allows customers to track and allocate outstanding surcharges. If properly managed, it can result in trading virtually surcharge-free; thus, removing one of the obstacles of supporting remanufactured products.

Clearly, remanufacturing can play an important role in protecting our environment, but also by promoting the benefits of remanufactured product and educating the end-user, without necessarily compromising margins.

The automotive sector is trying to be more environmentally-friendly, with new technologies being introduced to new cars, and aftermarket industry influencers can play their part by considering remanufactured product whilst driving their latest low emission vehicle. We have an obligation to protect our planet for future generations.