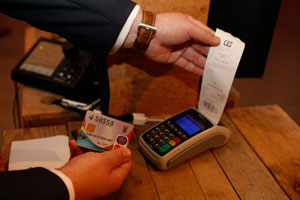 New legislation to cap hidden fees of debit and credit card transactions has been introduced. Adam Bernstein explains how this might affect you.
Last month, legislation was passed to cap the hidden cost of debit and credit card transactions. With 95.7 million debit cards and 61.7 million credit cards in circulation in the UK alone, what does this all mean and how will it affect consumers and traders in the aftermarket?

The European Commission wants to improve competition for all card payments. It estimates that the rules, when implemented, could lead to a reduction of about €6 billion a year in hidden fees charged to consumer cards.

The Regulation on interchange fees for card-based payment transactions follows a Commission proposal put forward in July 2013, and it is hoped that it will give more freedom of choice to traders while making card transactions more transparent.

When someone buys something in a store using a credit or debit card for example, these costs are hidden from the consumer and worse, neither retailer or consumer can alter these rates or shop around for the best deal. The only limiting factor on these rates is competition law.

Clearly costs need to be absorbed somewhere and so where traders pass these costs on to consumers this leads to inflated prices or traders make a smaller margin.

Europe has taken both Visa and MasterCard to task over the issue. Visa in 2010 and 2014 agreed to reduce its maximum average interchange fees for debit cards to 0.2 percent and to 0.3 percent for credit cards. MasterCard on the other hand found itself before the European Court of Justice, which, in September 2014, said that such interchange fees are a violation of EU antitrust rules. These new rates need to be shown in context that they are an average and were not compulsorily held down.

Once implemented, the regulation will formally and legally cap interchange fees at 0.2 percent of the transaction value for consumer debit cards and at 0.3 percent for consumer credit cards – both of which would apply to domestic or cross-border transactions. However after a five-year transition period, for smaller transactions only, member states can choose to set a maximum fixed fee of €0.05 (4p) per transaction.

The European Commission thinks the regulation should increase transparency and “help the card payments industry move from its current business practices to a new, more competitive system, to the benefit of consumers, merchants and banks.” The new regime should also deal with licensing issues and other conditions that have restricted the freedom of choice of retailers to choose payment methods.

With an eye to the future, the regulation removes major obstacles to technological innovation in payment options. Many with a recent iPhone know, for example, that their device features a NFC payment chip that when enabled in Europe (it’s live in the US) allows swipe-based payments from their mobile phone.

Of course there are other technologies in the market that allow consumers to pay via an app or with a fingerprint. However, Europe reckons that uncertainty on the rules regarding interchange fees has been one of the factors holding up the use of these systems. Consumers can then elect to have co-branded devices on their payment card, telecoms, digital or IT device.

Some have suggested that when the interchange fees drop under the new regulation that retailers could see a windfall and pocket the difference by not passing on the savings – “a mere 5p on a typical £48 transaction to consumers” according to the UK Cards Association.

Indeed, a report in the Daily Mail quoted Visa as saying that clarity on the fees was welcome, but warned it could hurt the cards industry. Visa too has said there was no guarantee that retailers would pass savings on to consumers. It’s questionable how the savings would be passed on as traders cannot differentiate between cash and card prices.

The comparison website uSwitch has made the point that both Spain and Australia have had fee caps for some time. While there has been no fall in retail prices cardholders in these countries still enjoy fee-free credit and debit cards.

Others have suggested that the card fees need to be covered one way or another and so consumers could see the benefits of card use (say cashback or rewards points) drop.“Profit margins for banks and card issuers on all debit and credit card products will reduce and in consequence there is likely to be a decline in the issue of loyalty/rewards cards.” uSwitch thinks the same: “While the changes will not have any substantive effect on the average person, what they will most likely mean is the end of the era of free rewards credit card.”

That said, the market for cards is very competitive and, assuming a good credit background, consumers should find it easy to change to a better deal.