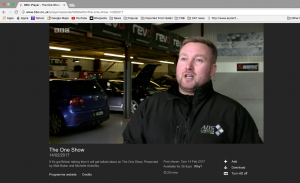 David Massey of ADS Preston has appeared on the BBC’s One Show to talk about the issues facing the owners of diesel car owners.

“Diesel cars are now subject to much more stringent testing… In my opinion these cars now have a limited shelf life” Massey told reporter Vicky Butler-Henderson during a segment that sought to explain why the danger of diesel emissions have come back on the political agenda.

“A lot of customers are very angry. They were promised by government that the cars were cheap to run, buy and repair, but this is no longer the case” added Massey.

The feature also included Greg Avery, an Essex-based car dealer who noted a drop in demand for diesel cars by about a quarter as well as a shot interview with John Prescott, who was Transport Minister at the time that the government encouraged the up-take of diesel fuel.

Butler-Henderson talked about the possibility of a new scrappage scheme and offered a few practical tips for motorists to pollute less when using their cars.

Meanwhile, both David and Frank Massey are preparing for another edition of the AutoInform training event, which will be held in March at GTG Scotland.