Ross Barnes explains there is an ethical issue as well as a financial one in reprocessing catalysts. 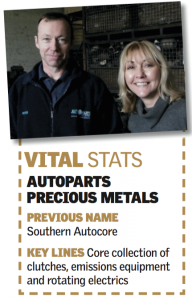 You’ve most likely heard the old saying: where there’s muck there’s brass”. This might be true, but a more accurate phrase could be: “There’s money where there is hazardous waste”.

This is the case at Autoparts Precious Metals, which has become one of the first companies authorised to deal with RCF matting.

TOXIC SUBSTANCES
RCF matting is a toxic substance found in catalytic converters and it is part of the thermal insulation that separates the core of the device and the outer can that holds it onto the exhaust system. Think of the most deadly kind of asbestos and you are on the right lines.

The good news is that RCF is only found in a minority of catalysts. The bad news is that no-one knows which ones as there was never any requirement on the part of the producers to declare or label products with the material. As such, every single catalyst that is recycled needs to be treated the same way. You can’t differentiate” said Ross Barnes, MD of Autoparts Precious Metals. “All catalytic converters have to be treated as hazardous waste if they are going to be smelted for material extraction”. He adds that a typical converter weighing four kilos will have no more than fifty grammes of matting in it, but that is not the point. It is a known carcinogen, and Autoparts Precious Metals is one of a tiny handful of recyclers in the UK that are allowed to deal with it.

However, before this can happen there is a certain amount of paperwork to do. “The first thing was to apply for a variation permit” said Barnes. “We are a processor, so we had to apply for an entirely new hazardous waste handling permit, which we now have and we are one of the only few in the country to have it to date”.

The legislation was late in coming as the problem has been known about for years. “Catalysts have always been hazardous waste” explains Barnes, adding that the Environment Agency that have introduced the changes in the rules have themselves been seeking advice on the best course of action.

PERMITS
Barnes explains that getting hold of the permit was difficult. “We had to use a consultant” he said, adding that the plant had to be thoroughly inspected. “We’ve had to have our extractors checked and monitored, but they are all up to spec as they had been serviced regularly and all cleared first time”.

Not all of the catalysts and DPFs that come into Autoparts are smelted. “As a core dealer, we purchase a lot of DPFs for re-use” he said, explaining that complete units destined for re-use simply require a transfer note.

We’re keen to see this operation for ourselves, so accompanied by Barnes and Purchase Manager Tina Courtnell we head into the main hangar, where core is stored. The main warehouse is neat and well ordered, although we are quite pleased to see that the smelting of the scrap cats does not take place on site.

“Once separated the metal goes off for scrap steel – it is non hazardous, while the ceramic, which is coated with washcoat and precious metals goes off to our partner’s smelter in Germany and then the RCF has to be properly disposed of” Barnes assures us. “When it leaves us there is a consignment note and we’ve separated the hazardous part from it and the rest goes back into the system”.

CORE COLLECTION
Although RCF is the conversation of the day, recycling catalysts and DPFs is only a small part of the operation. ABS units, A/C compressors, clutches, EGR valves and electronic power steering drives are just a few of the parts that are collected for remanufacture.

The warehouse is built in a courtyard with a number of sub- units around the perimeter that have various uses. On our visit, we were interested to see that one of these units was busy re-facing used clutch kits, which is still popular for clutches fitted to performance cars (we saw a parts trolley full of clutches for the Subaru Impreza). Indeed, clutches were the original part of the business as the company was established to arrange the collection of used clutches back in 1994 when Barnes saw parts in a garage he was working in getting thrown in the bin. “At the time, there was hardly anyone collecting core for remanufacturing. Scrap was about £5 per tonne and clutches were just getting thrown in the bin”.

By contrast, prices for parts were still high in the nineties as there was very little in the way of cheap components from the Far East on the market at the time, so it was good business to supply those that were able to remanufacture with quality core.

ETHICAL VALUES
However, it wasn’t just the financial issue that appealed to Barnes. There was an ethical element to it as well. “My boss said to me ‘I can see us opening our landfills one day and mining them’. We’re not there yet, but it was forward thinking. How can you mine ore on the other side of the world and make it into starters, alternators or clutches… and then just throw them? You’ve only got to get them out of the ground somewhere else and it is going to run dry” he said. “That’s what we’ve been doing with catalytic converters, because precious metals make it viable”.

Equally, high-tech parts such as ECUs, actuators and ABS systems are collected, for which the firm has been working with factors, where parts are purchased as a ‘sort of package’. “We can even offer a service where the customer can box parts up and send them to us” said Barnes in conclusion. “It is worth money, and more than that, if it can be used somewhere then it should be.