The offices of a number of suppliers, including Denso and Continental, have been raided by German police following an allegation that vehicle manufacturer Mitsubishi may have been fitting so-called ‘defeat devices’ to some diesel models.

A total of 10 sites are under investigation, including one Denso location and three Continental sites. Both companies have issued statements saying that they will assist the authorities as much as possible.

Mitsubishi is the latest VM to get embroiled in the ‘dieselgate’ scandal, which came to light in 2015 when Volkswagen was found to be using devices to cheat emissions.

The investigation is ongoing. 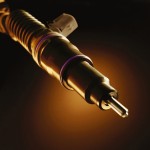