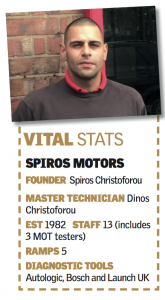 Ex-F1 technician, Spiros Christoforou, opened his garage business in North West London 35 years ago, and has enjoyed steady growth ever since. “We have got contracts with HR Owen Sports Car, which means we get a lot of prestige sports cars coming through from the dealership” said Spiros’s son Dinos – who is also a master technician at the firm. “This includes Lamborghini, Ferrari and Maserati. We have our own USP of fast cars that we service on a regular basis”.

While some garages have been known to still use older diagnostics, coupled with the newer technologies coming into the market, technicians should be regularly updating their skills both in terms of equipment and training, according to Dinos. “It’s hard to stay up-to-date in this industry because everything is changing” he said. “If you don’t keep up then you will start falling behind and I think many garages find it difficult because they’re always trying to cut down their prices”, adding that his staff are fully up-to-speed with tooling, training and the technical know-how to repair these models correctly.

WORKSHOP LAYOUT
This was evident from the workshop layout, which has a new automatic tester lane (ATL) installed for MOT on the right hand side with five dedicated service ramps lined up on the left. The site also contains an engine room as well as a dedicated car park space outback, which Dinos notes, is the only independent to possess one in the Park Royal area. With a handful of garage networks operating in close proximity and JT Car Repairs next door, we were curious to find out if this has impacted business. Dinos said. “There are around eight to 10 local garages in this area but we’re all in different leagues with one another so there is no cross over or competition between us”.

DIAGNOSTICS
Being a diagnostic specialist for most car models, means the team is well equipped for whatever enters the ramp. For troubleshooting and detecting fault codes, Spiros technicians will use Launch UK diagnostics and for more complex issues, the Autologic or Bosch KTS tool is the preferred unit of choice. Being a Bosch Car Service member also has its perks, according to Dinos, which is noticeable in the foyer area where many Bosch training qualifications are framed and hanging on the walls. “The Bosch training is world class”, he said, “They provide us with training from diagnostics up to service and master level technician”, adding that himself and his uncle are the two qualified master technicians on site.

SERVICES
To say the garage only conducts MOT and general repairs would be an understatement as there are many other services within its remit including air conditioning, bodyshop repair and fitting AlloyGators, which we were lucky enough to see Dinos fit to a BMW Z3 fresh off the track. Explaining his reasons for offering this service, he said. “It started with my mother who had a Porsche Carrera. She kept hitting the kerb and had to change her tyres nearly every two to three months as a result. They should normally last up to 12,000 miles on that vehicle.” He adds. “We told her to get rid of the car because it’s costing thousands on tyres a year, but someone from the racing community suggested AlloyGators and we have been impressed with them ever since”.

However, after fitting AlloyGators for nearly 10 years now, the master technician has found a number of fitment errors among some tyre fitting centres. He elaborates. “I have found people have failure of alloys because they have gone to a tyre fitment centre, where they have pumped up the tyre, handed back the keys but haven’t gone back around them for the final fitment”. Dinos makes sure that every AlloyGator fitted has ‘sunk in’ properly by applying pressure with a rubber mallet around the wheel, once they’ve been trimmed and fitted accordingly.

Although there’s been discussions between Spiros and his son about opening a second garage, they have decided to put it on the back-burner for now due to the growing demand of vehicles entering its current site as Dinos points out. “The way our business operates, it’s very hard to open a second garage because me and my father are hands on. Every job that goes through the garage, goes through us so we will carry out the quality controls and road test the vehicles when jobs have been completed”. He concluded. “It’s difficult to expand for these reasons however, we want to continue providing that high level of service and be there for our customers”.