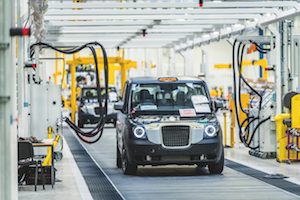 LTC, a wholly-owned subsidiary of Chinese VM Geely, has invested more than £300m in the new site in order that the TX5 will be produced at the plant and exported around the world. The investment and expansion of LTC has created 1,000 new jobs, including 200 engineers and 30 apprenticeships.

The site has the capacity to build more than 20,000 vehicles per year and the new vehicle is using the Volvo electric powertrain and platform, although the design of the outer body looks similar to previous taxis.

Deliveries of the new vehicle are expected to start in Q4 of 2017.

The London Taxi Company briefly went into administration in 2012 after parent company Manganese Bronze failed to secure funding, having failed to make a profit for five years. Geely, which already owned 20 percent of the taxi firm’s stock, bought the remainder of the company from the administrator in early 2013 to save it.