EVANS CYCLES TO BE SOLD BY PRIVATE EQUITY OWNERS 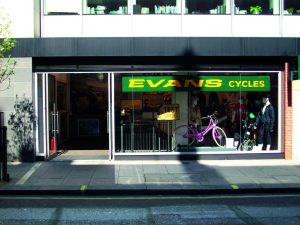 Evans Cycles is to be sold by its private equity owner ECI Partners.

The cycle chain has been making a loss over the past two years, although ECI has perused a strategy of expansion.

At the time of writing bids have been invited for the firm, with Halfords being reported by Sky News as being among the front runners.

Halfords itself set up the Cycle Republic chain as a rival to Evans Cycles in 2014. Halfords has previously stated an aim for Cycle Republic is to double the number of branches.

In general terms, cycle retail on the High Street has been under pressure as there has been a willingness by consumers to buy mid to high-end bikes from non-traditional outlets, such as Go Outdoors or from sports shops such as Triathlon. Low-end family bikes have been under pressure from online retailers such as Wiggle, which one retail survey put as the UK’s second largest cycle retailer in August