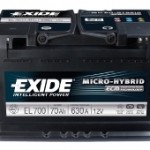 Exide has launched two new micro-hybrid batteries for the aftermarket.

The move underlines the growing influence hybrid cars will have on the aftermarketÂ and independent garage industriesÂ in the nearÂ future.

The two batteries are the result of extensive research development with European VMs andÂ have been namedÂ the Exide Micro-Hybrid AGM and the Micro-HybridÂ EGM.

Both are said to incorporate “advanced technologies specifically designed to meet the needs of the new generation of hybrid vehicles”.

The ECM battery, specified by Fiat, Alfa, Lancia and Toyota, is designed for:

The AGM battery is for higher performance cars and is designed to:

This battery is already fitted as OE on BMW’s Efficient Dynamic Series of vehicles, and will be specified by other manufacturers very soon.

Exide salesÂ and marketing directorÂ Andrew Bevington said: “The restructured power of Exide technologies in this era places us firmly as one of the largest manufacturers of electrical storage solutions.

“The car is currently at the centre ofÂ a technology revolution: Exide is at the heart of that.”