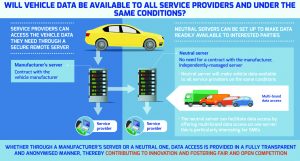 A new concept in the evolution of connected cars has been proposed by VMs, but many in the aftermarket are not happy.

Backers say that the idea of the ‘Extended Vehicle’ concept will lead to greater protection from hacking and fewer risks from on-vehicle software updates etc. as data will be stored on centralised servers and any access to data will be via these computers, rather than on the car itself.

A website to promote the concept, cardatafacts.eu, has been set up by ACEA, the body that represents VMs in Europe. The site argues that while the servers will be run by the VMs, third parties such as diagnostic tool companies are welcome to establish ‘neutral’ data centres, not operated or funded directly by the manufacturers. However, detractors of the concept say that it amounts to a ‘major threat to aftermarket competition’ as all of the data generated by a vehicle will be in the hands of the VMs at least to begin with, and the third party servers may be a bit like the ‘pass-through’ diagnostics from a few years ago, which used data pulled directly from VMs servers on third party diagnostic tools. Technicians complained that the data available was either late or incomplete compared with the dealer tool.

A recent study showed that the potential for financial loss for independent repairers, and extra costs for the motorist, could be huge if the Extended Vehicle concept is enacted in Europe and the UK. Both the VMs and independents, via the medium of trade bodies, are going head-to-head over the issue, and a test server is being set up to illustrate to the European Commision of the sort of problems that are likely to arise from it.