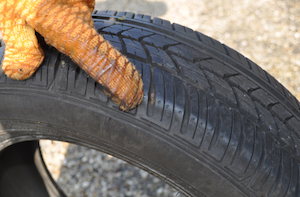 AN INVESTIGATION has found that defective second-hand tyres are being sold to motorists, after figures showed 989 deaths or injuries have been a result of these models over the last five years.

Evidence was gathered when trading standard watchdogs posed as customers and bought samples from a number of dealers in County Durham. An Inspector at TyreSafe concluded that six out of seven purchases were deemed faulty while one was classed as ‘legal’ and over 18 years old.

Two were seriously damaged after being under-inflated. Two had damage to the bead, a reinforced rubber section inside the wheel. One contained water, showing it had not been stored properly. Five had no official ‘part worn’ stamp, classing them illegal according to a report in the Sunday Mirror.

Previous data collated from TyreSafe backed up the paper’s sentiment, highlighting that 98 percent of second-hand tyres carry no ‘part worn’ markings while 4.5m are sold to UK motorists year-on-year.

A TyreSafe spokesman, said. “Competence among used tyre retailers is questionable and the majority of used tyres are not properly inspected. A tyre is classed as a waste product until it’s been fully checked”.

The National Tyre’s Distributors Association (NTDA) has expressed its dismay, describing these practices as ‘appalling’ and a ‘ticking-time bomb’. The federation also calls for a ban on used car tyre sales in an attempt to reduce further accidents and deter rogue traders from selling on faulty products.