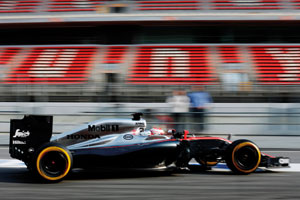 During Race Week in the build up to this year’s British Grand Prix, ExxonMobil and McLaren Honda were keen to point out the alignment between the lubricants used for racing with those sold in retail packs.

The last couple of seasons have seen the FIA tighten regulations for the sport, with teams being constrained to 1.6-litre V6 turbocharged engines and 100kgs of fuel per car. While these changes haven’t been universally welcomed, Bruce Crawley, Global Motorsport Technology Manager at ExxonMobil, can see the commercial advantages:

“The engine oil is also remarkably similar to what you would use in the UK. There are a lot of similarities between it and the additive packs and Mobil 1 off the shelf. Our objective for designing lubricants for road cars and for a F1 car is the same, and that is to keep your car running like new. We do it in a F1 engine because that maintains the performance of the engine, so you don’t get any power degradation, and in a road car engine to extend the life of the engine.

“It is not completely the same, there are some differences, but if you compare it to the oils used in Mercedes engines in previous years, they are quite different to what you would use in your own vehicle.”

Crawley added that the new FIA regulations mirror some of the changes in the retail car world, with engine sizes reduced, but power outputs and efficiency going up.

Jonathan Neale, Chief Operating Officer for McLaren Honda, said that the sport has always been a great place to showcase technology and engineering which pushes the boundaries for the benefit of creating tangible products for the commercial sector.

“Engine technology has changed enormously, we have gone from using six V10s engines in a weekend, to V8s and now V6s with a lot more hybrid technology,” he adds.

“The fundamental change is towards looking after our environment and we are working with ExxonMobil on a molecular level designing products specific for our racing programme, but that can be further developed for our commercial programmes.”

For retailers, stocking lubes that are associated with the highest level of motorsport can only be a good thing.