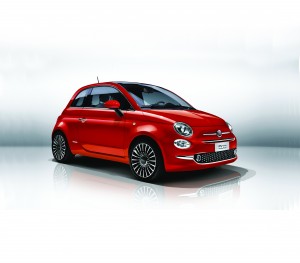 Cashing in on a spate of retro-styled vehicles, Fiat scored an immediate hit with the 500. Launched as a two-door hatchback and a cabrio, the
vehicle sold more than 1.5 million units during it’s seven year run and paved the way for the re-introduction to the North American market.

Curiously, the 500 was far more successful than the second-generation Ford Ka, with which it shared a platform – despite the fact that the Ford had a more comfortable suspension set up.

Engines include a naturally-aspirated 1.2 petrol, a more perky 1.3 and 1.4 petrol as well as a Multijet common-rail diesel unit. From 2010 onwards a Twinair version was also available. These two-cylinder engines are more similar in concept to the 1950s car, although the engineering could not be more different.

Just to confuse things, a special edition called ‘By Diesel’ was launched available in 1.2 and 1.4 petrol only!

Such is the way that these cars are configured when they were ordered there is a confusing array of wheel size combinations available for the same car. Briefly, you could order the car with 14,15 or 16” wheels. Fiatforum.com says that tyres should always be H-rated.

Anyone buying a Fiat 500 will have to get used to a choppy ride, particularly on pre-2010 models (there were a few changes made to the set-up in later cars). The fiatforum.com says that this harshness is due in part to the engine, with the 1.4 being the harshest and the 1.3 being the smoothest. Oddly, forum members indicate that the ride comfort can actually be improved with the fitment of Bilstein B14 sports dampers, although lowering a car is not usually associated with increased comfort.

Other members report that Koni FSD dampers can also be used as an aftermarket upgrade to the suspension. TecAlliance suggests that fitting a special plastic cover to the coil spring upper winding will sort this out.

Motaquip points out that upper shock absorber bushes are known to fail prematurely, causing knocking and vibration to occur within rear suspension components.

First Line note the odd fact that models fitted with Xenon headlights have a unique left hand suspension arm that differs from the standard left hand arm by having threaded mounting points for the headlight adjustment.

1.2 and 1.4 petrol models have a known issue with the drive belt becoming loose say Autoelectro. This can be caused due to either incorrect tensioning of the drive belt or the belt has become stretched. This fault can result in belt slippage and the alternator to charge incorrectly. The firm also say that the 1.3 JTD/Multijet models with stop start have a known issue where the start-stop system fails to automatically re-start the engine. This fault is caused by a fault with the vehicles engine control module.

On all petrol models a smell of engine burning oil indicates the crankcase breather pipe down the back of the engine hair line splitting, causing fumes to enter the heating system according to the RMI.

The RMI also point out that if the engine oil pressure warning illuminates intermittently then there is an ECU issue that can be fixed with a software flash (unless of course there really is an issue with oil pressure drop, in which case the remedy is likely to be substantially more expensive).

Comma Oil remind us that Fiat specify a two-year change interval for a reason: The system is hard worked and will degrade over time.

Surprisingly, there have been no fewer than ten DVSA recalls on this range. These include fuel leaking from the manifold and a risk of rear brake lock up. Worryingly (and we think uniquely) there was a risk of the wrong airbag deploying on certain models. The Arbarth had a recall relating to a risk of failing lights. Check that any model passing through your care has had these done.

Brake calipers are known to suffer with significant corrosion of sliding components resulting in diminished levels of return force for brake pads. This leads to vibration and noise resulting from the consequential brake drag say Motaquip.

Some owners have reported excessive gear whine, which seems to be caused by oil starvation. Gearbox oil top-ups are occasionally needed – but level checks can sometimes get missed in services. Petronas recommend a synthetic-based 75w85 lube and the capacity is 1.65 litres.

Knocking sounds that occur under steering loads can be attributed to the upper steering shaft fork incorrectly fixed/staked in place according to Motaquip. In extreme cases the fork can become separated from the shaft causing complete loss of steering function.

The presence of steering column noises is often caused by an insufficient quantity of thread locking agent being applied to the upper shaft fixing-bolt during assembly. In extreme cases this may result in a complete loss of steering control.

Due to the number of options when new, you are unlikely to ever see two 500 interiors exactly the same. Some reports suggest that Blue&Me wireless connection can be troublesome, though the root of this problem is often down to the user’s phone. You can read the trim code on the VIN plate, although it may often be easier to source some trim parts second hand. Eagle-eyed readers may spot that the VIN starts with the Polish letter code SU through to SZ. This is because the 500 is built in Tychy, Poland in a factory used at various times to produce the Polski Fiat 126p, Cinquecento and Sceicento – the 500s immediate predecessors.