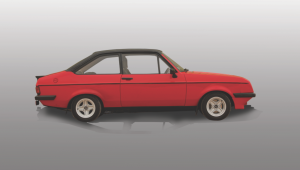  Launched for the 1968 model year, the Escort replaced the Anglia in Europe – and was an instant hit with the buying public. The model never dropped from the top 10 registrations list here in the UK for its entire production run. Built in Halewood as well as in Genk (although Continental production was shifted to Saarlouis shortly after.) Over two million Mk1s were produced and the MkII also sold extremely well, despite tough FWD competition such as the Fiat 128 and VW Golf. The relatively austere spec of the basic models coupled with the potential for easy DIY modification lead to the ‘tuning boom’ that saw accessory shops stacked with products for all driving styles and budgets.

The vast majority of surviving cars are either the sporting derivations (which were all produced in tiny numbers compared with the main run) or have been modified – so make sure you know what you are looking at.

The first Escort built at Halewood doesn’t have much in common with the last, built in the same plant at the turn of the century. However, one fault common on all models of Escort is the rear lights, which are prone to water ingress and earthing problems.
On Mk1s, the Sporting Escort Owners Club advises that you clean all of the connections and check that the earth strap (on the underside of the lamp) is firmly secured. The club notes that big gains can be made by simply cleaning up or replacing the reflector on Mk1s, or using foil tape on MkIIs (as these cars have a plastic reflector as standard).

All cars from the 1970s rust and the Escort was no exception. The problem if you are asked to inspect a car today is not so much what parts are obviously rusty – it is more a matter of detecting what rust has been hidden or plated. Cover sills used to be a common bodge, as did bunging the wheel arches full of filler. Strut tops are often plated as this was a common rust spot. We could point out every last spot where these cars can rust – but in short they can rust everywhere and it is east to cover up. Fortunately, there are a lot of new pattern panels on the market. Euro Car Parts for example launched a wide range of body panels a couple of years ago. the steering rack. Top strut mounting and bearings can fail regularly causing the steering to become tight, which can cause poor handling, as well as intermittent squeaking noises. First Line recommended that when replacing the shock absorbers or coil springs that the top mounts are replaced at the same time.

A sad fact today is that thieves are targeting popular classics from the 1970s. You’ll read elsewhere in this issue about a gang that have been caught, but not before they cut up at least 30 classic Minis. If you are doing an inspection, known history is absolutely everything, but this can have come from another car taken off the road long ago of course. VIN plates are often replaced during restoration. If this looks like it is the case, then ask to see the old one. On a slightly less serious note, owners, enthusiasts and ‘horse traders’ have rebuilt bread-and-butter versions of these cars to resemble RS, Mexico and AVO ‘works’ versions of these cars and the real identity of the vehicle might have got mixed up over time. There are books dedicated on how to tell a real works shell and there is a large price difference between the real thing and a recreation – so check carefully.

Pushrod Kent engines were fitted to the majority of RWD Escorts built, but most of those that survive today have a version of the Pinto BDA engine, or possibly have a Cosworth YB unit shoehorned in. Pushrod engines of course do not have an overhead cam or a belt to drive it, but all the others do and require the belt to be changed every five years, even if the car has covered comparatively little mileage. Gates points out that if an engine upgrade has taken place, the standard OE belt may not be suitable. The firm is able to supply upgraded reinforced belts for Cosworth BDA & YB. Importantly, the company recommends a drive system overhaul – replacement of tensioners, idlers and water pump (where fitted) is always part of the belt. If you have an original RS2000 that is suffering from rough, lumpy idle and poor starting it could be the clearance on the exhaust valves say TecRMI.

Interestingly, Continental versions of the Mk1 had dual circuit brakes, while the UK had to make do with single circuit. All years with drum brakes pulling to one side under heavy braking are likely to have the wrong wheel cylinder fitted to one side, van and saloon wheel cylinder inner bores are different sizes according to TecRMI.

Changing early cars from dynamo to alternator used to be something auto electricians would be asked to do every week. These days, a car that is so original as to still have a dynamo will probably be kept that way, but for the record, RWD Escorts with alternators were fitted either with Bosch, ACR-series Lucas or Femsa units, but it isn’t uncommon to find unrestored cars.

Front springs on the Escort are thick, heavy and rarely break. That said, many of these cars were inexpertly lowered by means of cutting the bottom loop off the spring. Such a bodge should be remedied on sight – proper springs and lowering solutions are available from firms including KYB and Bilstein. Suspension arms are a common failure with their bushes prone to splitting, so First Line continues to offer the lower suspension arms, as well as the suspension arm replacement bush kit. The firm also offers outer tie rod ends, as these too can also fail due to the rubber boot perishing over time, which causes contamination and leads to premature wear.

Dashboards were often cut about to accommodate extra switches or stereo gear – but note that an unmolested dash does increase value. RS version had a charcoal headlining where other models have a cream one. Almost everything can be re-trimmed or repaired at a price, but not everything is available new.