From the very small, to the very big 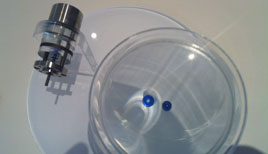 CAT paid a visit to the HQ of the two companies ahead of Automechanika since theyâ€™re both stationed near Frankfurt.

Freudenberg has been in business for more than 100 years and is still family owned (Iâ€™m looking out for single Freudenberg lass around Frankfurt as you read this).

Corteco is the arm dedicated to aftermarket sales, was only formed in 1996 and does business in the UK with vibration control parts, brake hoses, cabin filters and seals.

Itâ€™s turnover of around Â£5 million a year in the UK is somewhat drawfed by the â‚¬5 billion turnover Freundenburg reported in 2008.

There are more big and small numbers when you look at the firmsâ€™ history. One of the first innovations for Freudenberg coming with the development of a new chrome sulphate tanning process for leather in 1904.

It made the process more reliable, and cheaper, but also drastically cut the time it took to tan from 18 months to six weeks.

While such enormous strides forward are pretty much unknown today, the firm still innovates and profits from friction reduction in seals which help vehicle manufacturers to trim crucial 0.5g/km outputs of CO2 from their tightly legislated emissions levels with one seal. Collected together it can help a VM slice 5g/km off the output of a car with slippery, but tight, seals.

Freudenberg first entered the automotive seals market in 1929. It patented Simmering radial shaft seal design in 1932 and had sold the 100th millionth by 1953.

Pretty impressive, but these days it produces one billion Simmering shaft seals a year, such is the success of the part and itâ€™s hold on the market. It produces 200 million of them at the plant near Frankfurt alone each year, twice as many as it managed to sell in the first 21 years.

Seals have developed from the days of leather, of course, moving to rubber (of which Freudenberg blends 10,000 different consistencies with the raw materials it brings in), to friction free gas lubricated designs.

Its expertise with rubber has helped it to become the worlds leading supplier of sealing and vibration control in the OE world, with its part fitted to every car from a Tata Nano to a Porsche 911.

Itâ€™s also become a leader in cabin filters which it first started offering in 1989 and now enjoys a 60 percent share of the market. Â­It doesnâ€™t do any other type of filter since the material used in them isnâ€™t a core competence like the non-woven fabric in cabin filters.

Corteco has been banging the cabin filter drum for years now, but itâ€™s still to really take off. It could contribute sales of Â£20 million to the business, says Coretecoâ€™s man in the UK Steve Jarnett, four times itâ€™s entire turnover for last year. Based on the way in which cabin filters are treated by franchises, the aftermarketâ€™s turnover with cabin filters should be five times the size it is.

Garages still need convincing that they should be changed. Show a customer a filthy filter and the quick, easy job should be given the thumbs up but why, asks Jarnett, should you even be asking when its part of the service schedule?

Aftermarket garages are also, far too often, turning to franchises for things like shaft seals and liquid-filled engine mounts that are starting to a become a replacement issue (and at up to ten times the price of a conventional rubber-to-metal mount quite lucrative, too).

Jarnett says Corteco stands ready with stock to supply, so donâ€™t go to a franchise next time, ask for parts direct from the company that supplied them to the VM in the first place.