FUEL CARDS – SHOULD YOU GET ONE? 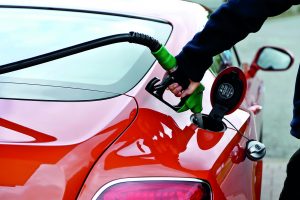 When running a business, the issue of fuelling company vehicles is probably not the first thing on one’s mind. Indeed it’s probably more comfortable to try not to think about it, seeing as it’s another overhead that the company could do without. On top of that, keeping track of receipts for accounts purposes or to reimburse staff creates an administrative headache. This is where fuel cards come in. Or rather, came in. Fuel cards have been around for decades, and aim to simplify the process of keeping a company vehicle fleet topped up with fuel by consolidating invoices.

A fuel card is essentially a credit card which is restricted to the purchase of petrol or diesel, plus some vehicle accessories depending on the type of card owned. The fuel card company then pays for a fill-up transaction, and sends the invoice to the company that the fuel card is registered with. These invoices tend to be weekly, and mean that hours once spent sifting through hundreds of receipts to reclaim VAT can be used more productively.

Many fleet operators now use fuel cards. But for those who don’t, it’s a question of knowing when to start.

There are many different types of fuel cards available to suit the type of business one might be running, from SMEs to large, nationwide fleets. BP, for example, offers its BP Plus card or fleets who need maximum coverage with a cross-acceptance partner network including Texaco, Gulf and Esso. Alternatively, there is the BP Plus Bunker specifically for bus and truck fleets who use key motorway and A-road routes.

Generally, more and more companies are signing up, as Jo McDonnell, UK Fuel Card Manager of BP, explains. “We have definitely seen overall growth in the amount of businesses recognising the ways in which fuel cards can support them, by saving them time and costs. There has also been a rise in the number of SMEs using fuel cards as it’s of high priority that their fleet management is efficient and easy to manage, as well as track, and fuel cards along with the BPme app make the process much simpler.”

One such fleet operator is Richard Shortis. Though the Shortis Group, which owns such brands as Wilco and Fast Fit, has outgrown SME territory, Shortis has made use of fuel cards for around 15 years, and thinks that a small fleet size shouldn’t be a factor in deciding when to adopt fuel card use. “Any organisation which has just one vehicle and they have a driver that has to go and put the fuel in it, it’s much easier to give them a card rather than giving them money,” he said. “We used to have our own diesel tanks and have them on site and fill up our vans on site with diesel. But when the savings disappeared from having your own tank, it became more convenient just to use a petrol station. So it wasn’t dependent on the size of the vehicle fleet, it’s the fact that we used to have our own tank and in the old days, years ago, you used to get quite a good saving if you bought diesel in bulk. But that [saving] got less and less, so that’s why we moved to the fuel cards.” 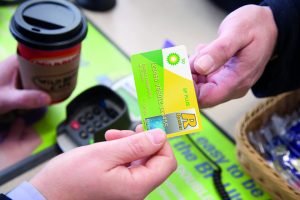 Fuel cards aren’t without their faults. Just like any other payment card, there is a risk of fraud associated with their use, despite efforts to make the platform as secure as possible. For instance, if a fuel card is stolen or lost, then what’s to stop anyone picking it up and purchasing fuel on a company tab? For one thing, notifying a fuel card provider of a lost card as soon as possible is a crucial step. But there is further security on top of this.

McDonnell explains that as well as the standard practice of setting a PIN number for card purchases, BP keeps an ‘online authorisation process’ of all fuel transactions, as well as “special alerts that monitor card use, keeping track of everything including location, site type, day and time, products bought, and litres of fuel purchase – giving fuel managers complete transparency.”

Additionally, cards can be linked to certain vehicles or drivers, further enhancing security and enabling fleet managers to keep a more detailed record of spending and mileage. “Firstly, when the driver purchases fuel, the registration and milage are requested at the point of purchase and captured as part of the transaction,” says McDonnell. “Secondly, if a driver pays using BPme, they must enter their vehicle registration and mileage before activating the pump, meaning more accurate data as they capture this whilst in front of their odometer.” This linking of fuel cards seems to be a strong security method employed by most fuel card providers. Indeed, when asked if he had ever had a security problem with the fuelling of his fleet, Shortis replied: “Not really. Most of the fuel cards are assigned to a vehicle registration. The only downside is, it depends if the petrol station doesn’t do their bit with the check on the vehicle. But we haven’t had any issues through misuse of fuel cards.”

Another concern is with the providers themselves. There is a concern among fuel card users that prices can rise if they don’t pay attention, as Shortis highlights: “The only downside is that some of the fuel card providers try to get one over on you – either alter their terms or say ‘oh, by the way we’re putting in a charge now so if you want to use a card it’s gonna be x number of pounds per use’ or whatever,” he said. This certainly isn’t exclusive to fuel card providers though, and many readers can probably tell of similar stories with their electricity, internet or phone bill provider, for instance. This is a nuisance, to be sure, but the way of tackling the situation is the same: negotiate the price down, or threaten to switch providers. “We have switched providers and they’ve come back pretty quickly saying ‘oh, we didn’t actually put that in!’” says Shortis. “Everything’s up for negotiation, or sometimes they don’t negotiate until after you’ve switched.” It’s worth keeping that in mind if ever you notice mysterious charges on your invoice. Plus, regularly keeping in touch with your provider to negotiate a better deal might be a good idea as well.

It’s a system that seems to work just fine, so what could possibly change? Well, even the fuel card industry is keeping on top of environmental trends. “For example, as EV becomes an increasingly relevant topic for both individual drivers and fleets, fuel cards will adapt to meet this need,” says McDonnell. “For example, BP has invested in Chargemaster, which will soon allow BP Fuel Card users to manage their fleet through one simple solution even if they shift to electric vehicles, including access to Polar, the largest network of electric vehicle charging points in the UK.”

Food for thought, whether you operate a one-van fleet or dozens of electric minivans.