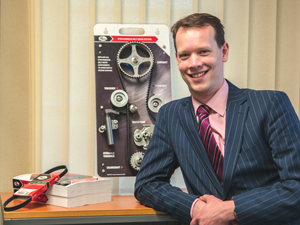 Component manufacturer Gates has come up with a novel way of reducing warranty claims. Country Manager Taco Homan explains: “We’ve found that if people used the engine specific tools then the risk of potential failure declines a great deal. In fact, we find that where the specific timing tool kit has been used, we get 90 percent fewer claims.”

Homan’s strategy is to allocate the tool kits with motor factors, which can then loan or rent the kits out to garages as required. Garages that use the tool kit will then be able to give the motorist an increase in the length of guarantee – four years instead of the usual two.

This represents a win for all concerned – according to Homan: the factor gets an increase in business, Gates sell more kits and independent garages are able to offer a service with a back-up that is in excess of what the franchised dealer could offer.

In recent years Gates has switched from just producing various drive belts to also producing a number of the metal parts found in kits – namely tensioners, idlers and, increasingly, water pumps. A factory in Izmir, Turkey produces the majority of metal parts, including a new device for the OE market known as an ‘alternator isolator decoupler’ – which apparently alleviates torsional vibration. Full details will be revealed at Automechanika in September.