GETTING A WARM GLOW IN SLOVENIA 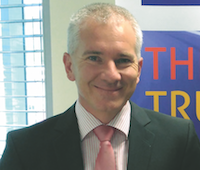 There are worse places to have a factory than the lush green Soca valley. Crystal clear steams trickle down from misty mountains, while vineyards stretch out towards the Italian border, punctuated only by medieval walled citadels.

However, we’re not here on a sightseeing trip. The purpose of our trip is to visit Hidria, a company you might be forgiven for not having heard of. Hidria is a major OE component producer, notably of glow plugs. While it has had an aftermarket range in Europe for some time it is about to launch in the UK having just signed a major distribution agreement with ECP – and we were keen to find out more. The firm’s range of glow plugs will be stocked by ECP and will cover a wide range of references, including a few that are not in anybody else’s catalogue.

Hidria’s history dates back to the 1950s when it started producing parts for central heating systems. However, it wasn’t until the 1970s that the firm relocated to it’s current site and started producing car parts (apart from glow plugs, the company produces mechatronics units and die castings). In 2015 the company announced that it was disposing of it’s subsidiary called Gif and that it had agreed a finance arrangement with its banking partners to allow ‘profitable growth and develop breakthrough innovations’. It plans to increase revenue from €260m to €350m by 2018.

One of the first things to understand about glow plugs is that there is no cheap ‘price fighting’ brand in the market. There are only half a dozen or so companies producing glow plugs and all of which have OE contracts. There are several reasons for this, most significant is that diesel components need to be precisely engineered and if a glow plug was even fractionally too long it is liable to touch the piston crown, resulting in significant damage to the engine.

This is one of the reasons, according to Aftermarket Sales Manager Jernej Kusterle, why the VMs are particularly discerning regarding the development and spec of the glowplugs. He took us to the development centre in the Tolmin HQ where he was delighted to show us around on the provision that we put on clean-room compliant clothing.

Kusterle is under no allusions that the firms product for the aftermarket is only likely to sell in scale at various points of the year. “Many more are needed on the market when the first cold mornings of the year happen from September onwards” he said.

Developing glow plugs is a pretty torturous business as it turned out. On our visit a machine was heating plugs up to an ambient temperature above 40 degrees C, before plunging them back to a freezing -40 degrees in a matter of moments. There were also machines that simulated extreme vibration as well as microscopes, spectrometers and an X-ray machine. In another room, complete engines were running in test cells, which we’d love to tell you more about, but we are sworn to secrecy.

Going down to the production area,we were surprised at the comparative lack of people. “We design the production machines ourselves – and obviously we don’t disclose what we build to the outside” said Kusterle. Like the 1980s kid’s TV programme Bertha, raw materials go in at one end and the finished product comes out of the other on most lines, although curiously, packing is still done manually.

PYRO LINE
Inside the line, each plug is coded for traceability and tested using a device called a pyrometer. Robots weld the tiny heater cold together with astonishing speed and accuracy. “We make the wiring for the inside of the plug in house” Kusterle explained. “It’s an advantage for us, because we can develop new applications faster and more easily” he said, adding that it was common practice among competitors to buy this wiring from external suppliers.

There was much more to the plant that we don’t have time to describe, such as the pressure- sensitive assembly, but we’re sure we’ll see a lot more of the Hidria brand in the UK soon.