Proposals for electric cars to wear green number plates could bring additional revenue for plate makers, but are unlikely to ever come into effect, according to several accessory shop representatives. The Department for Transport has begun consulting on plans to make electric cars ‘even greener’ with the introduction of legally mandated coloured number plates. It claims that such a move would ‘raise awareness of the increasing number of zero tailpipe emission vehicles on UK roads, help their drivers to benefit more easily from local incentives like free or cheaper parking and encourage greater uptake of new vehicle technology’.

But how prepared are accessory shops and plate makers to produce the literally green units? Those CAT spoke to expressed surprise upon hearing the government’s plans. 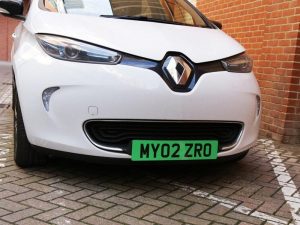 Jon Rogers at Wrexham Motoring Supplies said he couldn’t see a good reason for such a scheme to be introduced. “Every electric car owner will need to buy new number plates,” he said, suggesting the plans could be a ‘DVLA money-making scheme’. Further confusing things, he argued, is the fact that most bus lane and car park cameras operate using ANPR technology, negating the need for any sort of different-coloured plate.

As regards the plan’s potential impact on number plate vendors, Rogers said: “The colouring method would dictate cost. If it’s just one section of the plate that needs changing, it wouldn’t cost too much.” WMS’s method of plate production means that a different colour could be relatively easily added, but shops using other means of production could see their overheads significantly increased. However, he noted that customary delays to relatively radical transportation reform means he ‘wouldn’t worry about this for another year’.

Dean Bayley at Leicester’s Epic Accessories was similarly confused. “I don’t know what the benefit is,” he said, asking: “will EVs being able to drive in bus lanes help traffic flow?” He also drew attention to the potential for increased cost, on both the consumer and supplier sides, and suggested that drivers of non-electric vehicles could resent any special treatment afforded to EV drivers.

Bayley also noted that new number plate laws, first announced in April 2018, are still yet to be implemented. The BS AU 145e standards are set to be introduced as a means of improving the legibility, durability and conformity of all British number plates, but have faced numerous setbacks, prompting Bayley to argue that the DfT is ‘not prioritising what it should have done a year and a half ago’. He added: “There’s that much up in the air – we don’t know if we’re coming or going.”

So first impressions of the radical proposals are, at least from the aftermarket, skeptical. Transport Secretary Grant Shapps said the green plates ‘are a really positive and exciting way to help everyone recognise the increasing number of electric vehicles on our roads,’ and it seems that mere differentiation is the prevailing motive. Any concerns regarding cost or feasibility appears, at least for now, to come second to disbelief that such a scheme could even be implemented.