GROUPAUTO ENTERS THE FAST WORLD OF THE BTCC 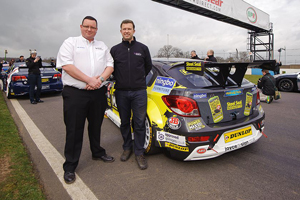 Groupauto and its Approved Garage scheme have increased their exposure by sponsoring the Power Maxed Racing team in the British Touring Car Championship (BTCC).

The team unveiled  this season’s Chevrolet Cruze, which will be driven by Chris Stockton, at at Donington Park in front of the media last week.

The news comes on the back of a successful campaign of sponsoring BTCC tickets at Donington last season, and now has joined Automotive Brands to become a partner sponsor of the team.

Phil Seymour, Approved Garage’s Network Manager, said: “Today has been a long time in the planning, but to actually see the car finally take to the track, pretty much ready to go, is excellent. The noise of the car in isolation is incredible, but it’s quite deafening when all the engines roar into life. The first race will really be something.”

Sponsoring the Power Maxed Racing team gives both Groupauto and the Approved Garage scheme a much bigger basis in which it can increase its awareness to consumers throughout the 2014 season.

It hopes that with an estimated 20 million TV audience and 400,000 track side spectators mixed in with social media and PR activity, it will see an increase in motorists using its independent garage network.

Chris Chaplin, Commercial Marketing Manager at Groupauto, said: “We look forward to maximising the huge potential on offer with this sponsorship and hospitality package. It will give Approved Garages huge brand exposure across the aftermarket and out to motorists too.

“We also see the social media channels working well to promote the quality of garages in the network and encourage referral business.”

The deal also sees 20 lucky Groupauto members per race being able to experience the BTCC from Power Maxed’s hospitality.

As guests, they will be treated to a first class service, including a buggy shuttle from the gate to the hospitality, food and refreshments, branded apparel, VIP tickets and a chance to explore the pit lane and a chance to meet the driver.

This news comes on the back of FAI Automotive returning to Touring Cars by sponsoring Wix Racing team for the 2014 season.