McConechy’s is one of the UK’s largest servicing and MOT chains, employing roughly 330 people across 59 sites in Scotland and the north east of England. It is estimated to generate around £45 million in revenue, and will slot in alongside Halfords’ existing Autocentre, weFit and Mobile Expert servicing brands.

The new deal has been described by Halfords boss Graham Stapleton as “highly complementary” to the firm’s existing range of product and service offerings. 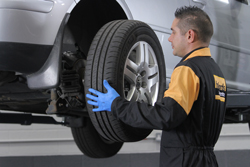 He added: “The vehicle servicing market is a £10 billion market, but one which remains highly fragmented, offering significant scope for Halfords’ trusted and recognised consumer brand to grow its market share considerably.”

The announcement comes as Halfords rounds up its half-year financial results, which reveal a 2.5 percent profit drop and 2.9 percent revenue decline in the six months leading up to 27 September.