A TV advert for retail giant Halfords has been found to break the Advertising Standards Authority (ASA) code.

The advert, seen in January, promoted the chain’s battery fitting service. The ad featured a sped-up view from the vehicle’s windscreen of a snow-covered road which suggested the vehicle was being driven at high speed around several curves and bends in the road, accompanied with engine sounds. On-screen text stated, “Ready for quick getaways? ‘WeFit’ batteries from £15.

Two complainants, who believed the advert encouraged unsafe driving practices in snowy conditions, challenged whether it was irresponsible. 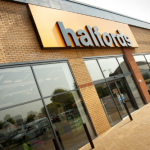 Halfords said that neither they nor their advertising agency believed that the TV ad showed dangerous driving. That was because the footage had been sped up to such an extent that it was clearly not real and therefore did not show unsafe driving practices.

However, the ASA disagreed: “Because we considered that speed was the main message of the ad and the sped-up footage gave the impression that the vehicle was being driven in a dangerous manner, we concluded the ad encouraged irresponsible driving” it said in a statement. As a result, the advert can’t be shown again in current form and Halfords has had its knuckles wrapped, having been told to ‘ensure that future ads did not portray speed or driving behaviour in a way that might encourage irresponsible driving’.