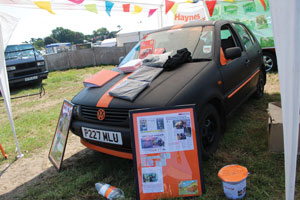 Haynes Publishing alongside fellow sponsors Draper Tools and Hyde Housing Association, has launched the second incarnation of its Mechanix course.

This time eight young people, aged between 15 and 25 years old, have been challenged with returning a 1969 MG Midget back to its former glory, and prepare it for its MOT.

The scheme being run by Prospex Youth Club in Islington, North London, is using the same framework as the successful pilot programme ran earlier this year, with the aim of providing the youngsters with practical mechanical skills and give them the chance to earn some qualifications.

The course, which began in mid-November, will give the young people the chance to gain two qualifications, with participants earning a certificate from exam board EdExcel for car mechanics and another award based on their personal development.

J Haynes, Chairman of Haynes Publishing, said: “The primary purpose of the Haynes Mechanix educational programme is to give young people belief in themselves.

“They become champions and they have the authenticity about them. That was one of the inspirations behind the Mechanix programme, and we wanted to go out and show that there is value to be had, and a sense of achievement and empowerment.”

Richard ‘Beef’ Frankland, Youth Services Manager at Prospex, said that it is great that the course has returned and looking to build on the success of the pilot. He adds that the interest in the Mechanix programme has been unprecedented and hopes that the success of the second project will ensure the Islington youth club can continue to run a rolling programme.

He says: “The MG will be a challenge as it has sat unstarted for a number of years but that makes it more satisfying when they get it working.”

Clive Richardson, Marketing Director at Draper Tools, added: “After the success of the first Haynes Mechanix initiative, we were delighted to learn that there was a second one in store. It is such a worthwhile project, and we’re happy to be continuing our involvement with the supply of tools to kit out the workshop.”

The first Mechanix course saw 12 young people repair an old Volkswagen Polo in order to pass its MOT, before selling the car on. As for the participants, two are now considering a career as a mechanic, while another is keen to mentor the next influx of future Mechanixs.