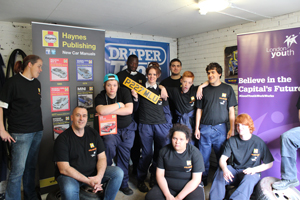 As the Haynes Mechanix course drew to its conclusion after seven weeks of training, the first group of youngsters have now successfully completed the pilot project and achieved a well-deserved City & Guilds qualification.

Having undertaken over 60 hours of training and assessment, including changing a wheel, replacing spark plugs, bleeding the brakes, carrying out MOT test procedures, amongst other things, the ten participants from Prospex Youth Club, and the neighbouring London Borough of Islington, all successfully completed the course and gained their City & Guilds Level 3 Certificate in Employability and Personal Development, an approved and recognised accreditation.

This included gaining three additional participants as members of Prospex’s own staff, decided to take on the challenge and get their hands dirty under the bonnet.

Such was the group’s enthusiasm that, in their ‘break week’ during Easter, they all voluntarily came to the workshop so they could do extra work on the donated Volkswagen Polo, aptly named Percy, to help restore him to his former glory.

Future plans for Percy remain uncertain but, following a trip to VW Festival where they will showcase the rejuvenated car, an idea under consideration includes selling him to a new owner with the money made being reinvested into another car / bike maintenance programme at Prospex Youth Club.

As for this set of ambitious Haynes Mechanix students, they are evaluating their options but, with a new passion and interest in cars. And they are not ruling out a future career in the industry, as Lucy, who took part in the course, says: “I’m hoping I can carry this on for a long, long time because it is something I enjoy. I’m keen to now learn how to fix other parts of a car.”

As a result of this successful pilot project, both Haynes and London Youth are considering further scope to roll out this or a similar scheme in other youth clubs.