HOW TO RSVP A REFERENCE REQUEST

You might be tempted to put exactly what you think of a former employee – but be warned that it is a legal minefield, writes Phil Richardson

However, in practice it is rare for an employer to refuse to provide a reference. This is partly because it is good practice to do so and partly because of the adverse consequences a refusal would have on the employee concerned. The response to a general request for a reference may contain nothing more than factual information about matters such as job description, length of service and reason for leaving (see side box).

Sometimes, though, prospective employers ask more specific questions about matters such as competence and character. It has been established over the last few years that employers owe a duty to former employees to take reasonable care over the preparation of references. Although a reference given by one employer to another about an employee has qualified privilege, which protects employers from liability for untrue statements provided they ‘honestly believed’ in the truth of what they said, there are some limits to what an employer can say. 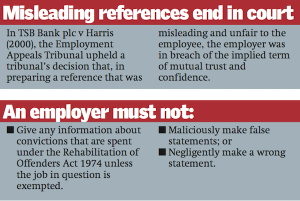 UNSATISFACTORY REFERENCES?
An employer also needs to consider carefully giving favourable references to employees whom they have dismissed on the grounds that their work was unsatisfactory. Although they may have no wish to ruin the former employee’s future career just because the working relationship broke down, this could backfire if the employee then challenges the reason for dismissal in an action for unfair dismissal.

EMPLOYEE LOSS
Employers are often not aware of the action an employee can take if they have suffered a loss as a result of an inaccurate reference. This could be either because they are unable to obtain
employment or because they are dismissed for having unsatisfactory references. There are three possible causes of action available to them under the general common law category of ‘tort’, namely defamation, malicious falsehood and negligence.

DEFAMATION
Where an inaccurate reference attacks the employee’s reputation, the tort of defamation is the most obvious cause of action. One 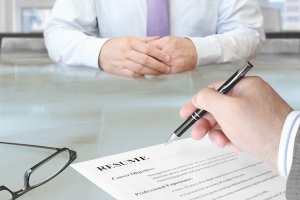 element of a defamatory statement is its falsehood. If the maker of the statement wants to allege that the statement is true, then he or she has the burden of proving it is so. As mentioned earlier, in the context of job references, the referee will have the protection of the defence of qualified privilege. The tort of malicious falsehood protects a person from loss of business reputation. The employee has the burden of proving that the statement was made ‘maliciously’ that is defined as ‘calculated to cause damage.’

However, both malicious falsehood and defamation may prove to be inadequate remedies due to the difficult task of establishing malice and the fact that an employee is looking for a remedy that will compensate him for loss of opportunity. The best course of action for an employee who gets an inaccurate or unfair reference is to sue his former employer in negligence.

It has long been a matter of debate whether an employer has a contractual duty to take reasonable care in preparing a reference. The courts have usually declined to imply such a term into the contract of employment because, generally, it is not necessary to give the contract ‘business efficacy’. In the case of Spring v Guardian Assurance there was an implied term in the contract, as it was standard practice in that industry, for a prospective employer to require a full and frank reference and as a result, a duty to take reasonable care over the reference could be implied into the contract.

At the end of the day, employers must exercise care when preparing references. However, if an employer takes a common-sense approach, there should be nothing for the employer to worry about. Employers must ensure that all the facts on which the reference is based are accurate and that the overall impression of the employee is not misleading.