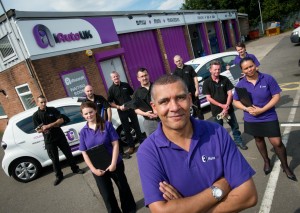 Independent garage franchise concept iAuto UK has
opened its second branch with plans to double the network by March
this year and offer dozens of locations by the end of 2015.

It comes two years after the first location was opened in Coventry and will be followed by franchises in Croydon and Guildford this spring. iAuto founder Andy Fox wants 30 garages in the network by the end of next year with locations in Dartford, Leeds and Peterborough coming in 2014. Local Solihull businessman Kam Saleem will run the new garage and hopes to build on the expertise that iAuto already has. He says that his team and
equipment have been geared up to deal predominantly with German marques and in the future to specialise in servicing
Land Rovers and Jaguars.
The garage is located on an industrial estate surrounded by a number of dealerships including Porsche and Synter BMW, but Saleem feels this won’t prove to be a challenge to win business as he will be targeting owners with vehicles over three years old. iAuto launched in Coventry as a German marques specialist and joined the British Franchise Association as a provisional member in May 2013.