IF YOU CAN’T BEAT THEM, JOIN THEM

Ahmed Khot invites us down to Heston Auto Parts in Hounslow 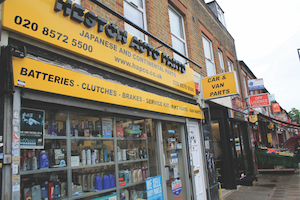 The business started in 1999 with Ahmed Khot running the shop after his father passed away.

Prior to the store’s opening, Khot’s father had been an active figure in the UAE aftermarket. “My father’s originally from India and he went over to Dubai where he set up a massive network of auto parts companies”, explained Khot: “We had 11 branches in the Middle East that we used to export from and with the experience my father accumulated out there, he brought it back to the UK”.

Khot’s father set up six factors in the UK but due to illness, he closed all the partnerships leaving Ahmed in charge of Heston Auto Parts to continue his work.

BUSINESS STRATEGY
Establishing a store in Hounslow which is a member of the CAAR buying group, led to a number of opportunities. Although this is a highly contested patch for all parts of the trade, Khot noticed the number of private hire companies in the area that served Heathrow airport “We looked at specific cars of our local market which are mainly cabs and chauffer companies, so we’ve targeted them and made sure we’ve have kept the necessary day-to-day parts in stock available so that when they come in we’ve got it” he said.

Interestingly, Khot has looked at the dozen or so businesses that exist on a small industrial area behind his store and has worked out ways of doing business with them all, rather than working against them. A partnership with one named A&N Auto Repairs for example has helped Khot find gaps for growth and margin opportunities while supplying spares to the technicians on a daily basis. “We’ve learnt a lot from them so we tend to know what’s going on in the market” he says. Having strong links with the local MOT centres has brought in more orders and kept those tills ringing each week.

DISTRIBUTION
Again, using Khot’s business philosophy of ‘if you can’t beat them, join them’, he has used the giant GSF Car Parts branch in nearby North Feltham to his advantage. “GSF has really supported us and has been a big help with technical information and boosting our knowledge of the European side”, he said. Equally, he doesn’t consider Euro Car Parts, who are very strong in the local area, to be an enemy. “With ECP, you always need a big brother on your side instead of fighting them, be with them” added Khot.

The firm now holds over 140 customer accounts and sends a lot of parts to Africa. Being part of the CAAR Group has also got its perks, allowing the factor to develop its online market and distribute to its European customers.

PRODUCTS AND STOCK
With the value of stock totalling £225,000, Khot has invested heavily in MAM catalogue software to monitor his wares, especially with the recent £20,000 extension that now houses a range of braking, suspension and spark plug parts. “We have invested quite heavily in MAM and it’s needed because of the size of our store that goes right out the back”. He explained that half the shop is dedicated to service kits and filtration that has proved a popular sell to DIY mechanics.

UPSELLING
As we enter the prime time for flat batteries and MOT services, Khot plans to bring his battery wares and ancillaries to the front of the store in a bid to up-sell to garages during the winter period. “I will be bringing our winter products and batteries to the front of the store, keeping all our summer wares at the bottom”. He added: “We have recently gone into parts for motorcycles and scooters and it’s proving to be quite good”.

The weak pound has been no barrier for the parts supplier. In fact, there are expansion plans afoot. “We want to start developing more product lines and importing products from abroad again” said Khot. “We are trying to look for a place for an MOT station which will have a motor factor at the front and will be two-in-one to take our business one step further”.

We look forward to catching up with Khot and his team again soon to find out how the new MOT and motor factor business has taken off.