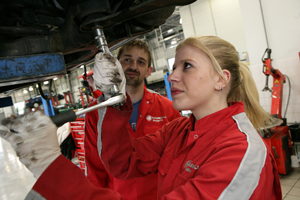 The Institute of the Motor Industry (IMI) has raised concerns over the Government’s new pilot apprenticeship scheme.

The new Trailblazers campaign has led the Chief Executive of the IMI, Steve Nash, to question whether it is actually feasible to achieve in the retail motor sector.

Concerns were raised after the Government announced its latest reform of improving further education and skills training by introducing employer-led apprenticeship programmes.

Nash believes that a lack of benchmarking and difficulties in raising enough funds will be challenging for to replicate across different sectors.

He also said that the new Trailblazers pilot could impact negatively on current apprenticeship programmes by undermining them.

Nash added: “The reality is that a large percentage of employers in the sector are small, proprietor-led businesses. The people who own and run these organisations already struggle to find the time to complete the basic paperwork for their businesses. Is it really realistic to expect them to dedicate focused resources to creating an effective apprenticeship scheme? And what this means is that another avenue for young people to get on the jobs ladder is closed.

“Feedback we received from stakeholders in apprenticeships strongly suggest that the current frameworks are fit-for-purpose. This therefore poses the question as to why there is a need for change. “

Despite not being directly involved in the Government’s Trailblazers pilot, the IMI says it is in a position to run employer-led schemes to meet the sector needs, and provide a post programme skills assessment to help apprentices achieve professional recognition.