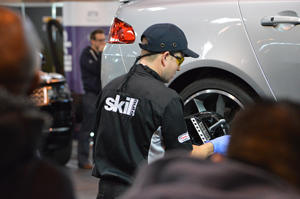 The hunt for the best young British automotive apprentice is on, as the Institute of the Motor Industry opens the doors to its 2014 SkillAuto competition.

It will see young technicians battling it out to be crowned as champion in front of a live audience at the final of the Skills Show in November, which attracted more than 100,000 people last year.

The next generation will be competing in either the Autobody, Autorefinishing or Autotech category, and those who are success in the online assessments will be given the chance to take part in heats during May and June.

Steve Nash, the IMI’s Chief Executive, said: “With National Apprenticeship Week fast approaching, we are excited to announce the start of the SkillAuto 2014 competition, which will showcase the very best automotive apprentices and help to highlight the great careers on offer in the automotive sector.”

It has also been confirmed that both Jaguar Land Rover and 3M will continue to host the Autotech and Autorefinishing  heats at their facilities, respectively. The competition’s profile has also been raised further after it was shortlisted to WorldSkills UK Partner of the Year Award, after its successfully hosted the 2013 edition of the competition.

“The standard of last year’s competitors was truly outstanding and the great news that the IMI was nominated as WorldSkills UK Partner of the Year will help to ensure this year’s competition will be bigger and better than ever”, added Nash.

All entrants must register for SkillAuto by March 21 and can do so by visiting www.autocity.org.uk/skillauto.