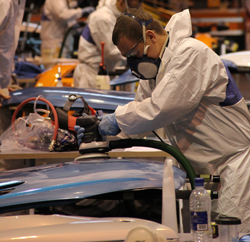 The Institute of the Motoring Industry (IMI) has been nominated for the award of WorldSkills UK Partner of the Year.

It is in recognition for the delivery of its SkillAuto competition last year and joins the British Florist Association and the National Skills Academy for Social Care on the shortlist, with the winner being announced at a ceremony on February 12.

The announcement came on the back of the successful final of the IMI SkillAuto competition, which took place at the Skills Show last year with more than 100,000 visitors attending the show at the NEC.

The award celebrates Competition Organizing Partners who demonstrate exceptional performance and excellence throughout each annual competition cycle, with WorldSkills UK working with 20 partners, including the IMI, to organise 70 skills competitions.

The IMI hopes that being shortlisted will put it at the forefront of the 2014 Skills Show giving a boost to automotive apprenticeship providers.

David Massie, Skills Competition Manager at the IMI said: “I never expected this and feel very honoured we have been nominated alongside colleagues who deliver exemplary competitions.

“I am however, absolutely delighted that all the hard work, dedication and effort put in by the SkillAuto team has been recognised in this way and look forward to hearing the winner announced on the 12.”