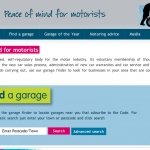 Independent garage membership of Motor Codes’ Service and Repair Code has passed the 2000 mark for the first time.

Subscription rates from independents have increased by 45% so far in 2013 and bolstered numbers on the scheme with its garage finder and customer rating website.

While Groupauto’s Approved Garage Scheme, which launched this year and is underwritten by Motor Codes, has helped to boost numbers significantly, it is not the only source of new subscriptions.

Just less than half of the 700 new independents taken on by Motor Codes this year are Groupauto Approved Garages, in fact, although the buying group does have ambitions of 600 on its books by the end of this year and 1000 by the end of 2014. Groupauto is currently touring the country drumming up support for the scheme.

Motor Codes Managing Director says the revenue-generating benefits, and the support offered to both customers and garages, are attracting more independents to the fold.

“When Citizens Advice released its consumer complaints league tables this year, once again we saw independent garage repairs up there in the top three. We put together some figures of our own and showed that, for customers of Motor Codes garages, the risk is hugely reduced.

“We know that people who book through Motor Codes will spend roughly £19 million with garages this year and their survey returns, average a 93% satisfaction rate, demonstrate the safe-spend environment that exists within the network.”

Franchised workshops continue to outnumber independents by nearly three to one on the Service and Repair Code, with 5600 subscribers, but independents are extracting more value from the scheme.

Figures released by Motor Codes earlier this year show that independent garages have generated an extra £3000 in revenue per business through the Service and Repair Code, £500 more than franchised workshops have leveraged. Unipart Car Care Centres have done even better and netted an average of £3500 each.

Other figures from Motor Codes aimed to demonstrate that the conciliation service offered to unhappy customers more often backed garages in disagreements and will have protected them from around £800,000 of claims by the end of the year. Around £350,000 will have been paid out to motorists, on

The motorcodes.co.uk website is currently receiving more than 6000 reviews from customers each month and has around 140,000 online today for other motorists to read when deciding on which garage to use.