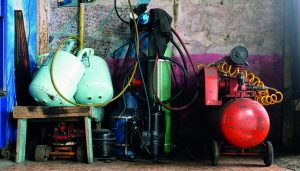 Illegal and potentially hazardous air conditioning gas has been entering the UK and European aftermarket, partly as a result of a reduced supply of legitimate R134a refrigerant, according to a director of Honeywell.

As the EU has been pursuing its climate change policy, the amount of harmful fluorocarbon gasses (known as F-gas) allowed to be sold has reduced significantly in the last few years. The first big cut was in 2018 when the amount of gas allowed in the market was reduced by 37 percent.

Tim Vink, Director of Regulatory Affairs at Honeywell International Inc, explained: “The problem comes when people think ‘I can make a bob out of this’, so they get offers from suppliers, essentially from South-East Asia, and possibly unwittingly started importing gas without having an adequate quota. They’d then offer these products [to the market].”

The problem is apparently so widespread in some places that genuine suppliers face what Vink describes as an ‘existential problem’ for their businesses.

Product that has no business being in the market is obviously harmful to legitimate refrigerant suppliers, but the issue has wider implications: “The problem is, you can’t be sure what is on the packaging label is actually in the container and that could cause serious issues with the functioning of the system. It could have a completely different vapour pressure which could blow up the compressor,” warned Vink. “If you are not using the right lubricant and the compressor runs dry, you get a burn out and all that sort of stuff, so you have to be very careful with the material you put into an air-conditioning system”.

Another concern is the container. Vink said that many of the products taken off the market so far have been in non-certified and non-refillable gas bottles, of a type that has not been legal in Europe since 2006. Honeywell and other F-Gas producers have formed a trade body, known as the European Fluorocarbon Technical Committee, or EFCTC, with the aim of informing the market and pursuing culprits through legal channels.

“The members of EFCTC have taken the initiative to take an integrity line where people can report anonymously if they receive anything suspicious in the market and that information can be used to build a picture of where those products are coming from in the market,” explained Vink. The ‘action line’ and legal action against perpetrators is taken by an independent third party, because as Vink explained: “We are not experts in prosecution and providing the right sort of evidence”.

The initiative has already seen some success. “Material has been seized in the Netherlands, Spain and Poland,” said Vink. “We as an industry are spending a considerable sum with a third party investigation unit that will go to prosecutors in the countries where material is found”.

Vink believes that the spurious product is being sold both online and by cold callers to aftermarket businesses, offering discount gas. Ultimately, the problem will be relieved by an adequate supply of legitimate gas back in the market and Vink assures us that a low-GWP drop-in replacement for R134a is being worked on at the moment, with a launch slated for early 2020.

Get more information about the EFCTC campaign at fluorocarbons.org