Petrol models, starter motors can burn out due to faulty ignition switch, but on 1.3CDTI Diesel models the Alternators are prone to premature pulley failure, often caused by a faulty tensioner. 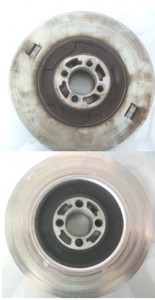 Since the TVD turns at engine speed, a worn TVD can cause vibration rather than acting as a vibration damper. The vibration of the belt between the pulleys will result in belt wear and add stress/strain on the tensioner and the other pulleys and ancillaries including the alternator pulley, thus causing premature failure of the alternator clutch pulley.