Sven Nielsen, Technical Director from MEYLE, says the following difficulties may arise with the Volkswagen Polo:

Rubber mounts rank among the most vulnerable automotive components. Designed to absorb the high effective loads occurring during acceleration and braking and to stabilise the control arm, they are subject to critical levels of strain. 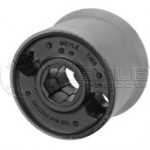 Under the loads acting on the bushing the rubber will crack causing the fissures to grow towards the part’s interior and along the surface. This can cause the rubber strip to break and the part to fail prematurely. As this can adversely affect the vehicle’s tracking stability, the condition of the rubber bushings is checked as an integral part of every general inspection. The pass certificate will not be issued unless the cracked bushing, however small the fissure, has been replaced.

For the latest HD bushing generation local stress peaks resulting in premature OE part failure were eliminated using FEM (finite element method) calculation models simulating body stress and strain behaviour during operation. Based on the results of dynamic component tests made from a wide range of materials an entirely new part has been modelled using a design and materials ideally geared to the loads it has to bear. The newly developed solid HD rubber bushing features a rubber compound designed to reduce tensile loads while maximising part life and increasing roadholding characteristics. The new MEYLE-HD bushing fits a variety of applications including – besides VW Polo – many more VAG models like Skoda Fabia, Seat Ibiza, Skoda Roomster, Seat Cordoba and VW Fox.

Intense strain and high surface pressure wear and stress on the ball joint. This causes a premature failure of the ball joint and generates noise at the front axle.

MEYLE in-house engineers increased the diameter of the ball head of the ball joint to 22 mm, in addition to using wear-resistant synthetic ball sockets with high-tech grease. The reduction of the surface pressure ensures a significantly longer lifetime.

Owing to the larger ball head the ball surface on MEYLE-HD stabilizer links has been increased by 50%. This way we have managed to significantly improve the part‘s load carrying capacity along with its service life. The blue clip-on plastic socket adds additional strength to the MEYLE-HD part.

Worn out brake discs affect the braking behavior of the vehicle. Rust may play a major role in this case.