THE VW SPECIALIST WITH AN ELECTRIC FUTURE

Like so many of London’s archway workshops, Jack’s Garage in Notting Hill has not had an easy ride over the past couple of years. But the events that nearly led to this VW specialist’s collapse – and what ultimately saved it – make for one of the most poignant transformation stories in the sector.

Established in 1995, the garage is split into three separate units: two for general maintenance and repairs, and another for specialist bodywork. “We’re winding down a bit for the end of the year so we’ve only got one car in the bodyshop, usually there’s two,” explains owner of 12 years Joseph Salama, gesturing at a bare campervan being re-assembled, before showing us a picture of an immaculate 1972 example that was picked up by a very happy customer the day before. 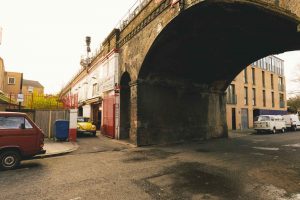 There’s parking for a further four vehicles in a small lane outside, and knowing everyone in the neighbourhood makes it easier for Salama to park a few on the street when business is booming – like today. You’ll see some newer stuff occasionally as well; Salama is happy to work on certain loyal customers’ runabouts – and his three-ramp shop has the necessary kit to ensure they can be looked after just as effectively as the classics.

From outside the workshop, it’s difficult to ignore the 221ft shell of the Grenfell tower block looming large overhead. Salama explains how his business’ proximity to the site of such a high-profile tragedy nearly made continued operations untenable in the months after the disaster: “It meant parts deliveries couldn’t arrive, clients couldn’t pick up cars and pay, and clients couldn’t drop off their vehicles,” he explains. It wasn’t just logistics that were under threat, either, Salama recalls several incidents where he had to comfort customers who broke down upon seeing the tower. “A lot of people don’t really register how close we are,” he says, “consciously or subconsciously, if you had a choice to come into the area, the majority of people chose not to”. 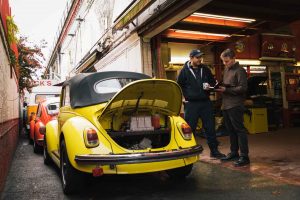 As Christmas 2017 neared and turnover reached a low point, Salama had to make cutbacks: “A lot of staff left of their own accord, and I had to let a few go. The workforce more than halved – we had 14 people, now we’ve got seven.” Two days before the shop shut for the holidays, a threatening visit from bailiffs even forced Salama to forego his own salary in order to pay an outstanding energy bill.

Now though, local businesses are picking up the pieces, with Jack’s Garage in particular enjoying a successful comeback. Old customers are returning and new ones are finding out by word of mouth, but Salama has realised that he can’t rely just on servicing and repairing ancient Volkswagens. A new element to the business plan was required, and signing a deal with German classic car electrification specialist eClassics looks to promise a significant boost.

A bright yellow example of eClassics’ electrified Beetle, known as Bumblebee, is currently on loan to Jacks Garage for customer demonstrations. To the casual observer, it is a sympathetically restored convertible that’s been upgraded with ATS sports wheels and a modern infotainment system. Take a look around, though, and you’ll start to see just how radically this Bug has been overhauled. The big clue is the relatively empty engine bay. Gone is this model’s air-cooled flat-four and manual gearbox, swapped out for a Bosch-developed electric powertrain taken from Volkswagen’s e-Up electric city car, a purpose-built single-speed transmission and an underfloor battery pack – hence the prominent new side skirts. “The driving experience is incredibly refined. The weight distribution and handling are amazing,” says Salama, suggesting that the lowdown batteries and empty front luggage bay (the fuel tank has, obviously, been removed) help to improve upon the dynamics of the original Beetle. 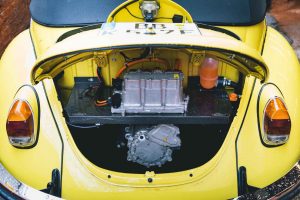 Salama’s relationship with eClassics was struck during a meeting at the Frankfurt motor show last September, where the Renningen-based team – funded by significant external investment from a European investor – was convinced by his enthusiasm for the project and proposal for a UK outpost. Returning home, Salama began work converting one of his own Beetles to electric power using a battery pack from an early electric Smart car, and a ‘crate’ electric motor from industrial equipment supplier Curtis. Welsh conversion specialist Electric Classic Cars provided the components for the first conversion, with Salama citing founder Richard Morgan as an ongoing source of inspiration and tuition.

“That car flies, but it’s not refined,” Salama says of his first effort. However, demonstrating that he could adapt his skill set to suit a changing motoring environment was essential to gaining eClassics’ support. “We had a very steep learning curve, and I don’t think they would even entertain the thought of including us as a partner if we hadn’t done that conversion first, and they knew what we were capable of.” Fortunately, it paid off, and planning is now underway to begin offering the same product and service offering as eClassics itself.

The majority of Salama’s staff are currently undertaking EV training sessions with the IMI, and one technician is even heading out to eClassics for a month in 2020 to provide technical input for the next generation of electric car conversions. It’s not a case of old dogs, old tricks. “We certainly have been given a lifeline,” Salama reckons. 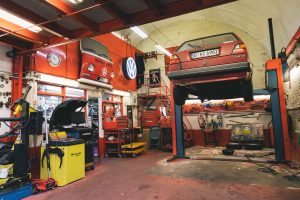 But is it difficult to remove the heart of a car that is so familiar to so many, taking away the noises and smells that so many enthusiasts adore? Salama puts it bluntly: “Internal combustion is a dying industry globally – and anybody in this industry who hasn’t accepted that fact needs to re-educate themselves.” Although his team’s bread and butter is still fixing the foibles of ageing VWs, he makes no secret of his progressive mechanical attitudes: “There are so many of them, so in terms of recycling and upcycling, this is the perfect vehicle of choice.” Having once driven a hydrogen fuel cellequipped VW bus to Morocco, Salama is convinced there are ways for classic car owners to use their vehicles guilt-free.

But aside from the environmental implications, what really attracted Salama to the eClassics concept were the performance and usability improvements that come with electrification. Salama says driving Bumblebee is ‘terribly exciting’ and ‘bloody fast’ – hardly praise you’d normally heap upon Volkswagen’s insectile runabout – and goes on to explain that production models will have a range largely matching the new Volkswagen models from which they take their underpinnings, and an 80 percent charging time of less than 40 minutes. And the clincher? An agreement between eClassics and the VW Group’s Components division allows classic VW owners to retain their VIN and number plate after conversion, and Salama explains that a data-sharing agreement means that “if something happens you don’t have to get it recovered all the way back to eClassics or London, you can go to any VW dealership and they’ll type the chassis number into the system and access all the schematics of all the components used in that build.” To all intents and purposes, this is as easy to own as a factory-fresh VW.

For now, then, it looks as if Jack’s Garage has been saved from oblivion. Salama has placed an order for one of eClassics’ ‘skateboard’ EV chassis, and Jack’s will have carried out its first in-house conversion within the next few months. But diversification opportunities are never far away, and he’s already plotting his next move. Ever in tune with the times, Salama hopes to obtain funding to set up a small film production outfit, and document his conversions on YouTube. And what’s more, expansion is on the cards: “I’m going to be employing more people next year when we start to get more orders – more cashflow – and I can afford it.”

“If you don’t move with the times,” Salama says, “you get left behind.” Not normally what you’d expect to hear from a fan of old cars, perhaps, but a sign of sector-wide changes that could be made in the coming years. Maybe you should mess with a classic, after all… 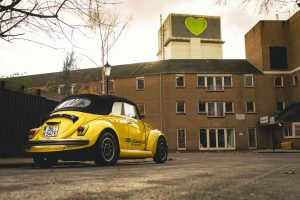