It’s all about the bling for T-Cut 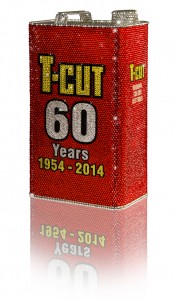 A glittering £50,000 tin of T-Cut has been created to celebrate the 60th anniversary of the colour-restoring scratch treatment

Created from 26,000 Swarovski crystals, which could pay havoc with even the most robust of paint finishes, the encrusted tin took 75 hours to piece together and has been insured for £50,000.

It will embark on a tour of the country, visiting selected retailers with ‘appropriate security measures in place,’ before finding a permanent home at T-Cut owner Tetrosyl’s Bury headquarters.

It marks the start of a programme of anniversary celebrations for Tetrosyl brand which will also include a nationwide campaign to find the car that most needs some T-Cut TLC.

Tetrosyl Group Chairman Peter Schofield said: “After 60 years and tens of millions of tins produced, my father Clifford Schofield, who invented the formula in 1954 and took his scissors to a Tetrosyl Cutting Compound label to turn it into T-Cut, would be incredibly proud of just how well known it is today.”

After stating life as a paintwork restorer, the T-Cut brand has grown in a family of products including shampoo and detailing polishes.