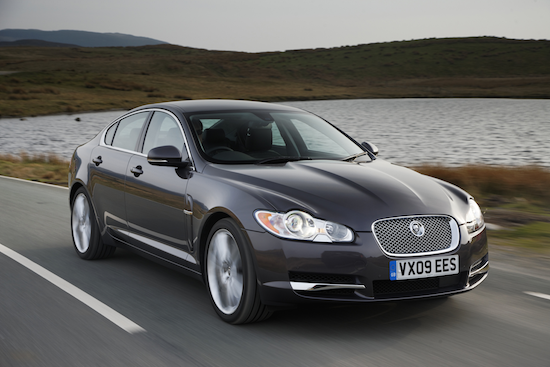 Launched in 2007, the Jaguar XF was a replacement for the elderly S-type. While the
styling divided critics no-one could accuse JLR of producing another retro pastiche vehicle – indeed the car was all about modernism.

In 2008 JLR was bought out by Indian conglomerate Tata Steel Industries. a move which many commentators were sceptical about at the time, but now agree it was one of the best things to have ever happened to the company in terms of design and build quality. The result of this is that the 2007-2015 XF is a popular car in the trade, with values remaining steady after the initial drop-off.

AROUND THE WHEEL
TPMS sensors are prone to corroding and producing the MOT-failing problem of putting the light on. A lot of these cars were ordered with the 20” wheel and low-profile tyre package. These look cool, but do little to improve the ride and the rims often come into the trade with damage that goes beyond just scuffs. It’s a powerful car, so you might expect it to run brake pads relatively quickly, although there are reports that it uses rear pads faster than you might imagine.

REAR SUSPENSION
  On XJR and XFRS models there is a possibility that the rear toe linkage could have separated from the subframe if the vehicle has been particularly harshly driven. Other than this, all the usual suspension checks apply.

EMISSIONS
All diesels that don’t go on regular runs can suffer from blocked DPFs, though a search of forums including Pistonheads suggests that this range suffers more than most. A few people have reported cracked DPFs – presumably as a result of forced regeneration.

ENGINE
The 2.7 diesel is the only engine in the range to use a cam belt – and JLR recommends replacing it at an optimistic 112,000 miles or 10 years. As always, these numbers should be treated as an absolute maximum. The diesel engine was popular through the XFs run as it was reasonably economical compared with the petrol versions and sat in a low tax group (a situation that is likely to change in the coming years). Cambiare say that technicians investigating a hesitation, or stalling as the engine returns to idle, should bear in mind that the engine oil temperature sensor on these cars relays data to the engine ECU. This is used to determine the viscosity of the engine oil and control the operation of the variable valve solenoid. A failing temperature sensor could cause the valve timing adjustment to be set incorrectly, effecting running. A fault code of P0197 may be recovered.

Owners have reported problems with both Camshaft sensors on some of the petrol engines. Cambiare explains that it would be unusual for two sensors to fail at the same time, so the cause of the problem is likely to be the shared earth via the ECU. Technicians should check continuity of the wire, often Green/Black in colour, before replacing the sensors unnecessarily. Fault codes P1174, P1175 and or P1176 may be present. Fault codes P1106 and P1107 may direct a technician towards replacing the MAP sensor. However, these codes can also refer to the charging reference from the alternator being out of range and require the battery status monitoring software resetting.

WIRING
Relatively common faults identified by TecRMI, (the technical service and repair arm of the TecAlliance Group) include the engine dying and a short circuit with a subsequent fire risk. The first cause, which generally affects vehicles manufactured between November 2012 and May 2013 is due to the fuel pump stopping and therefore cutting the supply of fuel and is the result of a problem with the cable harness, which will need to be replaced. The second, which generally affects vehicles manufactured between September 2012 and March 2013, is also wiring related and is caused by the wiring harness being damaged through chafing against adjacent components and requires the installation of protective covers.

INTERIOR
Leather is the only seat covering offered, which is tough for anyone who is repulsed by the idea of sitting on animal hide. This is unusual for Jaguar, as its models have usually been offered with an option of cloth. Generally the interior is good and hardwearing, although the touchscreen infotainment system feels a little dated now and the modules are expensive to replace when they go wrong. Depending on spec, you may find that vehicles come with heated or cooled seats and some models are specified with a Bowers and Wilkins or Meridian sounds system. Note that these vehicles use the fibre-optic MOST network. Don’t try to splice extra equipment into the loom – it won’t work and the car may refuse to start. Some owners report problems with touchscreens freezing – which is perhaps to be expected. However, some other electrical niggles such as ‘boot open’ light remaining on, could take ages to diagnose and fix – or they will result in an unhappy customer returning the car. The clock apparently runs a little slow and loses a minute every couple of months – though there’s not much you can do about this!

RECALLS
The XF has had more than its fair share of recalls. DVSA first recalled this car in 2008 for rear seatbelt problems. Since then it has had recalls for instrument cluster warning speaker faults, various recalls relating to fuel starvation and fuel leaks as well as power steering failures. These steering failures are down to pin holes appearing from corroded pipes with the resultant loss of hydraulic fluid. DVSA notes that this fluid leaking poses a fire risk. A further recall was announced to sort an engine-cut out issue relating to the charge air cooler hoses and resonator on some models built between July 2012 and September 2013. There was a production issue, which means they can leak leading to a risk of stalling. Most recently, in June 2016 the factory issues a further recall over an engine cut-out issue relating to sudden in-tank fuel pump failure.