THE ACCESSORY SHOP THAT CAN FIX YOUR HORSEBOX 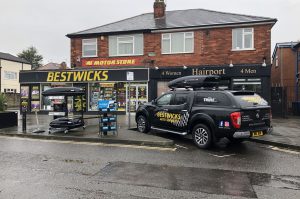 Welcome to JG Bestwick, the Allenton accessory shop where you can have your vape pen recharged while you get a new tow bar fitted.

That’s no exaggeration – owner John Bestwick is so committed to the sustained prosperity of this local landmark, that aside from the traditional oil, blades and paint offering, he does a roaring trade in e-cigarette equipment, bicycle tyres and key cutting, among other things.

That’s before mentioning the real money maker. A little while ago, John posted a competition to the shop’s Facebook page, with a set of Tennants ‘4D’ number plates (so called because they use laser-cut characters, rather than traditional stamped 3D number plates) offered to the winner. It soon went viral, attracting well over 17,000 views, and now they make up a ‘decent chunk’ of the shop’s income, with buyers coming from as far as Tamworth, more than 30 miles away. “There’s been no massive surge in accessory demand for years, but the exception is 3D and 4D number plates,” he explained. The units can be produced entirely in house, using the same machine as their standard counterparts, and are priced from £45 per pair.

Bestwicks opened on this site in 1953. The building was much smaller back then, and the shop largely depended on a pair of roadside petrol pumps to attract trade. John first stepped behind the till when helping his dad on weekends, before departing Derbyshire to join the Metropolitan Police at 19. When he returned in 1990, the shop was double the size. “One week I was driving a pursuit car in London, and the next I was standing behind a counter selling contacts and rotor arms.” 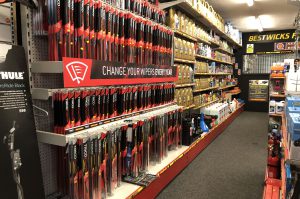 Back then, it was totally different: “We were still selling more hard parts, and we were a Haynes Gold Dealer, which meant we had 150-200 titles. We don’t stock any now.” Trends change, and Bestwicks had to adapt: “People don’t even want to touch their cars anymore,” John lamented. It’s not a family business anymore, either, although full-time employees Dean and Alan have been around so long that their camaraderie has become a big part of the shop’s appeal.

What really sets Bestwicks aside from the majority of high street independent accessory shops, aside from the sheer variety of its stock, is its presence on social media, and a website that’s as slick and intuitive as any of its mainstream competitors. John explained that he “was aware that internet sales were taking a chunk out of our trade,” and decided to hire a professional website developer, set up a Twitter page and learn all about SEO. The result? If you type ‘numberplates Derby’, or ‘horsebox maintenance Derbyshire’, into Google, Bestwicks is among the first results. It’s all organic traffic, too; “I’ve never paid for an advert,” John said proudly.

But the shop’s local reach is impressive, too. John is Chairman of the community traders association, having campaigned successfully to keep the two hours free parking on the high street and decorated the parade for Princess Anne’s 2019 visit, and has begun to exploit Allenton’s rural surroundings for a whole new source of income: horsebox repairs. “We’ve started to push it a bit more this year. Alan’s competent to do caravan servicing, and a horsebox is just a box on a trailer,” John explained. It’s opened up a whole new stream of revenue for the business, and – what’s more – exposed the brand to a whole new demographic of potential customers, who are not necessarily local residents. “It makes up an important part” of the shop’s income now, and is the reason why Bestwick’s company truck is a 4×4 Nissan Navara, rather than a small van – muddy, unmade roads are a common obstacle. 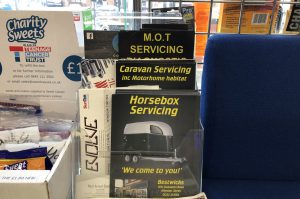 Ever looking forward, John has big plans for the shop’s online activities, perhaps expanding its Instagram following and filming a series of instructional videos in the shop’s servicing and fitting bay. And who knows what product lines he’ll diversify into next?