KEEPING IT GREEN AND CLEAN ON THE ENGINE FARM 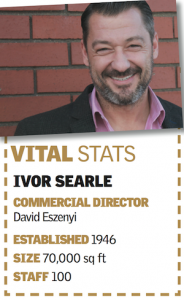 Ivor Searle’s history began 60 years ago when the eponymous agricultural engineer made his mark on the industry by setting up his engine reconditioning business in the village of Wicken. After Searle’s passing in 1956, sons Colin and Michael eventually joined the business rebranding The Wicken Crankshaft and Bearing Company to Ivor Searle Ltd.

The duo relocated to the 10,000 sq ft. Soham-based facility in 1983 where they went on to sell remanufactured engines across the UK. “Colin decided to learn more about the business and so he carried it on”, said Commercial Director David Eszenyi: “He thought the key is stock availability selling an engine off the shelf rather than waiting for it to come in and fix, which was a bit of a turning point for the company”.

33 years later, Searle’s vision lives on bigger and better than before with an extra factory space operating a stones throw from the main building; specialising in rebuilding engines and cylinder heads back to OE spec. Meanwhile, a 15,000 sq ft. facility was opened in 2012 behind the existing factory for the production of reman gearboxes and turbochargers.

WORKFORCE
With a large space to operate, Eszenyi was bought in as Factory Manager in 2012 due to his knowledge and expertise of the automotive industry, having previously ran manufacturing facilities for the likes of Rolls-Royce and Prodrive. Along with Eszenyi and Colin Searle overseeing the operation, the company employs 100 staff across its three facilities while delivering to over 1,500 automotive distribution outlets. “We run a 50 mile radius where we pick up and have stock delivered by TNT”, said Eszenyi. “They come in every day while we load up the trucks for next day delivery. TNT brings back the old core for us, which is important when the engine is fitted.”

WEBSITE
With around 2,000 customer accounts on its books, the firm has found the recently installed Ecat trading platform along with a revamped e-commerce website that draws data from Car Web and MAM has helped to generate more business while taking some pressure off sales staff who deal with around 500 calls each day. Eszenyi notes: “By the time you put the phone down, we might get five to six quotes from the same registration numbers from garages of customers ringing around trying to find the best price”.

FACILITY TOUR
Our tour started with the Head Shop, which might sound very new-age, but in fact is concerned with the top end of engines. Eszenyi walked us through the procedure: “We have a stringent process where we strip the unit down. Once it is down to its component parts, they are machine tested, crack checked and put back to OE specification”, he said. “We provide an engine rebuild service where we pick up the engine with a 10 day turn around and deliver it back to reman spec”. He explained that the company could deal with many types of engine, ranging from popular classics to LCV diesel and petrol models up to four litres.

The Head Shop was coherent in layout with the first room used as a stripping bay to break down the engine components before undergoing a deep steam and clean process. Eszenyi added: “We treat pistons as consumable parts and they all go in the bin along with the gaskets and bearings, before putting new ones in”. There was a lot of rattling and twanging further on as the team re-built and sprayed the engines and cylinder heads in the workshop area. We managed to get a close up view of a reman built V12 classic Jaguar engine before it was packaged and sent out for distribution.

When asked about the training involved, Eszenyi said: “Cambridge has been a predominately growing area in engineering. Here it’s growing so you’ve got no choice but to train everybody properly as long as they’ve got the mechanical knowledge”. The firm has also taken on apprentices from colleges in and around the Cambridgeshire area to provide them with the necessary skills to carry out engineering on reman components.

The final stop was the turbocharger and gearbox factory, which followed the same order, as the parts were broken down, cleaned, rebuilt and re-sprayed before they were boxed and sent off to stockists. Eszenyi wrapped up the tour: “Every garage in the network will know Ivor Searle for engines, but it’s the aftercare where we win a lot of work. When something goes wrong we deal with it. We are like the Waitrose of the aftermarket”. He added: “The warranty staff fix so many problems over the phone thanks to their in-depth experience and the aftercare service we provide”.

EXPANSION
The company has some projects lined up with plans to expand its export business further into Europe by introducing next day delivery to its European customers. Eszenyi explained: “We are going to push further exports into Europe because the market is healthy as there is a lack of reman product”. He continued: “Depending on the courier, it could take four to five days to go there so we want to supply next day delivery as we do in the UK”.

Eszenyi said the reman firm hasn’t ruled out producing alternators, brake calipers and axles further down the line, but for now, it will continue bulking out its fastest selling lines and distribution to the UK and Europe. We look forward to catching up again with the team at Ivor Searle soon.