KEEPING IT LOCAL AS AN INDEPENDENT

Jimmy Tawana shows us around ABC Auto Factors in Slough 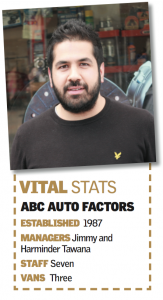 Driving rain had been a feature of our past few days on the road, but fortunately the sun came out when we reached the village of Taplow as we paid a visit to ABC Auto Factors.

Etched between a church and a row of houses, the family- based motor factor has been in the same place for a while. Jimmy Tawana, Manager of ABC Auto Factors, explained: “My father Jagjit Tawana started the business back in 1987 and this year, it will mark 29 years of service for ABC Auto Factors”. He added: “In the beginning, it was just my father operating the shop, but we slowly grew our customer base and eventually started delivering parts in the local area”.

With the business now in the hands of Jimmy and brother Harminder the duo manage five staff, over 150 customer accounts and three delivery vans distributing parts in and around the Burnham, Slough and Maidenhead areas.
When we entered, it was a bit of a tight squeeze due to the limited counter space, but spatial issues aside, the business seems to be doing well with phones ringing off the hook throughout our visit, while retail customers queued up to purchase bits and pieces. Although physically small, appearances can be deceiving as parts are stored in every nook and cranny of the branch. “Customers that come and visit us are actually shocked as to how big the store is”, said Tawana. “The shop used to be a house, a butchers, then more recently a pub with the benefit of a cellar which is now home to car parts rather than beer barrels. Over the years the premises have been extended twice to almost double its original size; we now have a large garage at the rear and every single room on the first floor is stocked from floor to ceiling with parts”.

PRODUCTS
As we wondered through the backroom, we found never- ending aisles of aftermarket brands from Borg & Beck air filters to Banner Batteries and Shaftec brake calipers. Tawana commented: “Naturally basic service parts are a huge area for any factor but recent investments in braking, rotating, steering and suspension as well as brake hydraulics have been instrumental to the growth in these areas. We recently changed our caliper supplier to Shaftec and are now seeing a huge increase in sales; it has proved to be one of our best decisions of late”. We also found two shelves with a variety of Lucas Oil products that has proved a popular sell among trade professionals.

COMPETITION
The continuation of stock cleansing has also generated profit for the business with Tawana’s team monitoring stock pareto and up-selling products. “We try to work a lot on cleansing our stock as often as possible or suppliers allow; with limited space it is imperative that we have the correct items on the shelf at all times. Items without any sales in the previous 6-12 months are constantly analysed. This analysis with the aid of the pareto available from our suppliers and our parts reports enable us to stock what is most relevant to our business and local car parc”, Tawana replied.

The ‘buying power’ from larger factors could be a force to be reckoned with as Tawana explains: “In the surrounding areas there are two ECP branches, GSF, AllParts as well as MPD with a local distribution hub. With ABC being a single branch operation with limited resources such as number of vans; it could be argued that it is difficult to compete, however, being a UAN member definitely has its benefits”.

The factor has been a UAN member for five years, which has enabled them to compete against local independents. Harminder Tawana, Director of ABC Auto Factors, elaborated: “For the small fee we pay, the benefit of joining the UAN involves better invoice prices plus rebates which has helped tremendously in growing the business and generating margins for us” Harminder concluded: “The UAN also supports us with a marketing budget which we have used for seasonal promotions on our product ranges”.

CUSTOMER BASE
Going above and beyond the customers’ expectations is vital for keeping most businesses a-float and ABC Auto Factors have done this by providing an efficient delivery service to workshops while venturing out to new garages to build up its customer base. “My father’s role in the business has now shifted to that of a sales rep. He is responsible for visiting new garages that we haven’t dealt with before in the area”, Tawana continued: “Just recently we have managed to pick some new accounts after persistent visits to them. I am a firm believer that where we may lack in the number of vans or personnel at branch level; the personal service we are able to offer contributes to our overall competitiveness.”

While the firm is keen to build up its customer rolodex, remaining loyal to their existing ones is essential to see customers return to the store in the near future. Tawana added: “We try to get out as much as we can to see our customers, just popping in to say hello and have an informal chat is important to show that we’re still interested in them”, he concluded.