KEEPING REMAN AT THE CORE 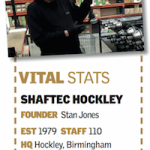 Long-established brake and steering remanufacturer Shaftec has been on a multi-million pound expansion programme over the last few years, having relocated the majority of operations from its previous Nechells site to a modern 42,000 sq ft. industrial space in 2015. The move has since enabled the Tecdoc data supplier to double its production and stock capacity, supplying over 6,000 drive shafts and 1,300 CV joint references to the aftermarket, backed-up by a recent brand and website revamp. This is where we met with Shaftec Sales Director Tom Curtis who took us through the day-to-day operation.

CORE
Our first stop began at the delivery depot where staff carried out their daily runs to collect and return old core for a second chance of life. However, there is a mandatory procedure to undertake before products are restocked on the shelves. “Our drivers go and collect the core which is booked in electronically”, said Curtis. “Everything has to come back in Shaftec boxes for two reasons, one, it’s easy identification because it’s got our part number on it and we know what parts are in the box, which is checked with images when it comes back in. Separate to that, the driver’s sheet will tally up the return with what’s in the box so they can match up to each part”, adding that the firm will usually receive up to 20 pallets a day.

CHECK-IN
Parts brought back are checked- in individually through the company’s online booking system. With many components to get through, Curtis and the team have adopted a quick and efficient process that incorporates separate check-in points for each product category. A check-in station is also utilised for stock not fit for remanufacturing which is something crucial that Curtis is trying to make customers aware of. “We’re traing customers to look for the right returns. In turn, our customers are training garages to make sure that when something comes back off of the car that it’s fit for remanufacturing” Curtis continued. “Things like this can carry a £100 surcharge and if you reject them, it’s going to cause upset so we try to educate our consumers as much as we can from that perspective”.

PRODUCTION
The next phase involves bringing components to the production benches where operators will strip down driveshafts and calipers to bare metal, before adding in new pistons, seals and CV joints later on. Before this can be executed, parts must first enter a deep clean process via the Shot Blasting Machines to remove all traces of rust and grease. “The Shot Blast Machines will take rust off to make it a clear part and we’ll use a Soda Blaster System for more intricate parts where rust gets into certain areas of the component”, said Curtis. After this, the casing gets a fresh coat of paint.

ORDERS
The firm can process up to 300 orders a day managed through Shaftec’s in-house production system. This provides staff with a run down of all the components required for each customer purchase. The system follows a similar set up to core check-in whereby operators will construct driveshafts and calipers at separate assembly points along with computer systems, assisting them with the essential CV and outer joints needed for each customer order. Curtis elaborated. “Our IT system tells operators what they have to build and what model the CV joints are. Our programme also tracks the status of who’s building it and how many are being built each day”.

Before ending up in Shaftec branded packaging, calipers are pressure tested in all car conditions and receive a part number after the all clear. “We have three testing machines to test each caliper before it’s boxed up” said Curtis. “Like a traffic light, it either passes or fails and typically 1/100 will fail and end up in scrap”.

MOVING FORWARD
Once our tour finished, Curtis explained that the firm’s next agenda is increasing stock capacity further by building another mezzanine floor to cater for its steering portfolio. He concluded. “We almost have all of our wares in-house but eventually, we want to bring the remaining units from our Nechelles site into this space with the addition of a new mezzanine floor for steering racks and pumps”. The supplier has also said it has taken on more electrical steering systems as hybrid and Connected Car technology becomes more commonplace in the years to come.