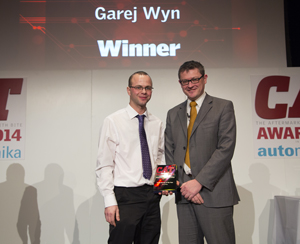 The Large Garage of the Year category has been dominated by ABP Motorsport, based in Cheshire, who managed to complete the quadruple last year. This year its monopoly was broken by Welsh workshop Garej Wyn who has scooped the accolade for the first time.

Owner Gareth Mathias was jubilant about picking up the illustrious CAT Award and said: “It’s one of the best things to have ever happened really. No-one around here has ever won anything like this before, so it is brilliant.

“We are extremely happy and very surprised, especially to win Large Garage of the Year. It is quite an achievement when you look at the competition we faced.”

The last two years has seen Gareth and his garage come on leaps and bounds after moving from an old 1950s filling station, into a new purpose- built unit.

“The move to the new premises has meant we are busier,” he adds. “It also means we can do a lot more work, and it is easier to carry out the work we need to. It is designed to be a working garage whereas the old place wasn’t, it has made things a lot quicker and more efficient.”

Gareth says the aim for Garej Wyn is to continue growing its business and customer base over the next 12 months, and of course, to do the double at the 2015 CAT Awards.