Lobby gets excited by a room that changes colours 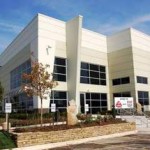 I have just returned from Germany, on a trip to the Freudenberg HQ as guests of Corteco.

I neverÂ realised just how much research and manufacturing effort goes into seals and vibration control in carsÂ (the vibration testing machine was awesome).

And also, I had no idea that the history of Freudenberg stretches all the way back to the 19th century, when the company began manufacturing high-quality leather for shoes.

Their automotive history began in the 1920s with the invention of a leather seal – and from then, it’s been growth all the way for one of Germany’s blue-ribbon companies.

The way they do things in Germany seems very different to the UK.

For instance, during a tourÂ ofÂ Freudenberg’s innovation centre, I came across a ‘space age’ room that changes colour depending on the aims of the people working in it!

I swear this is true:Â the colours used apparently help activate the brain, in order to stimulate creativity.

Office layout was vastly different to the way we do things, as well.

Space is consideredÂ very important. No-one has a desk as we know them; insteadÂ people work on portable units which they gather in the morning, plug into a work station that’s free, before packing everything away into the unit at the end of the day.

If you didn’t like the person you were working next to, you could just wheel yourself off to another work station! Brilliant! Watch out Martin Henry!!!

They even have a table football game – but Reiner Martsfeld, one of Corteco’s big bosses, seemed reluctant to indulge in a one-off Germany v England match with our publisher, Jim Foster!

Posters are displayed openly with support and a gentle prod to help staff with ideas and also the fact that there is no such thing as a bad idea.

StaffÂ brainstorm all creative ideas.Â This is so important, as new ideas are the key to business success,Â whether it be packaging design, advert design, new products, store layout or innovations.

Anyone who speaks to me on the phone would be very aware of the background noise we sometimes get here at CAT, which drives me barmy!

What a difference it would make to have an office where we can think and work without interruption. But at the same time, I suppose I have to concede that IÂ have never met a quiet sales person!