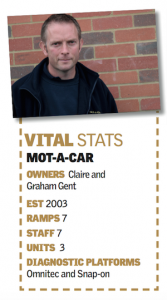 As the festive season approaches, most workshops will be embracing the spirit of Christmas by means of winter health checks as well as changing batteries, bulbs and wiper blades – all of which are things that boom in the colder months.

Although this is a buoyant time for garages, one business in particular has been busier than normal. Sittingbourne-based MOT-A-CAR was our
destination today, where the team have been working tirelessly to get their new Van Shop up and running.

VAN SHOP
Launched a month earlier, the new unit has allready attracted leasing companies, that have started booking in their van fleets. for servicing. Garage Owner Graham Gent explained: “We have always serviced vans, but we felt a need to separate the units we currently have.”

“We do everything in here from motorcycle testing to mini buses classes one, two, three, four, five and seven”. He adds that wife and business partner Claire, deals with the marketing aspect of the firm, using her expertise to spread awareness of its latest addition through the company’s website and social media platforms.

UNITS AND SERVICES
As Gent already touched on, the business contains several units that all serve a different purpose. Apart from the newcomer, a Tyre Shop with a class four MOT bay occupies the site, alongside the main workshop space – used for servicing a mishmash of vehicles from farmers Land Rovers to high-end, executive cars. The workshop also contains a reception area featuring oils and additives from the likes of Forte and Mobil, that were stacked along counter display stands on our arrival.

Besides general MOT repairs, there are plenty of services in the company’s itinerary, as Gent brings to our attention, “We’ve got a total of four vehicles that go out for car collections and deliveries”. When asked what areas are covered, he said: “We travel anywhere in Swale from the Medway towns to Maidstone and Canterbury. We have been further afield, but the difficulty is time out of the workshop, so we have to monitor this accordingly,” adding that a vehicle recovery process is also provided by the firm, which would explain the large pick-up truck parked outside the premises.

BUSINESS GROWTH
The company’s expansion over the years comes down to several factors. However, Gent says the main one is the team’s work ethic, something that has been difficult to identify when recruiting potential candidates prior. “The biggest challenge has been employing staff”, Gent recalls, “Many people coming into the trade aren’t as driven as they should be. They don’t see it as a profession but rather as a job, and unfortunately, there’s too many kids coming out of college that don’t seem motivated.”

Teething troubles aside, the business employs seven technicians bringing experience from fast-fits, independent garages and dealerships up and down the country. Gent himself is a Master Technician who began his training as a young man at a nearby Ford Dealer. He later moved on to manage a workshop at a local Renault dealership, before opening the business with wife Claire 15 years ago.

Gent mentions that the team have ‘tapped into the data and report side of its Garage Data System (GDS)’, thus enabling them to exploit further sales and margin opportunities. This internal programme has proved a necessary asset with the garage reporting an annual turnover of £500,000 last year.

CONNECTED FUTURE
While talks in the aftermarket revolve back to connected cars, Gent is aware of this technology and how it may impact business in the foreseeable future. With that said, he is in the midst of putting infrastructure in place to safeguard the company. This will involve investing in another unit on-site for repairing electric and hybrid vehicles, as well as acquiring some charge points and an electric vehicle bay.

Of course, training on these systems is fundamental, but Gent seems to have this under control as he prepares to enrol staff onto relevant courses next year. He concluded: “We have to balance courses with our technicians’ levels and experience. It’s about finding the right place and training provider. We also want to buy a few more workshops to expand our brand, but again, it’s all about finding the correct location.” We look forward to visiting Gent’s new sites in the near future.