MAINTAINING CUSTOMER RETENTION AT ALL TIMES

While in Wales, we visited Wrexham Rollings, a long- established distributor and part of the LVW Group.

Since its acquisition in 2008 and subsequent relocation across town, the branch has gone from strength-to-strength, according to Regional Manager Vince Blackmore, who’s been a long-serving employee and witnessed the firm’s growth first hand during his 32 years of service. “I joined Rollings in 1985 when we were situated in the middle of Wrexham at the old Brooke Street building”, he said. “The LVW Group saw the sales results in the business and took advantage of this opportunity by acquiring the store from previous owner David Evans nine years ago”.

Now based from a 10,000 sq ft facility, Blackmore is responsible for overseeing the performance of the Wrexham store as well as LVW’s Flint and Oswestry sites. However, those are just to name a few in
the distributor’s portfolio as Blackmore explains. “In 2011, LVW bought the Rollings branch in Oswestry and acquired parts distributor Moparts in Liverpool”, adding that the firm also possesses its LVW Automotive outlets in Birkenhead and Ellesmere Port, bringing the group’s network to six sites.

Wrexham Rollings houses 30 staff and 15 vans, a few of which on our visit were lined up symmetrically while they loaded for a run. “Our vans deliver locally within a three to four mile radius and we have timed runs for the mountainous regions reaching as far as 30 miles”, replied Blackmore, who also informed us that plans to extend its fleet is currently a ‘work in progress’. 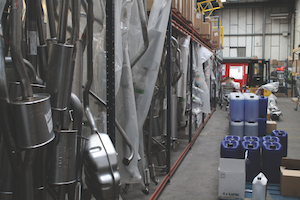 WAREHOUSE TOUR
After a bit of background history, Blackmore took us around the warehouse to go through the day-to-day running of the operation. From the ground floor up to the mezzanine, we were impressed with how organised each aisle was as product groups were stacked tidily along the shelves with no signs of overstock. “Coil springs, steering and suspension and brake pads are just a few of our fastest selling lines” explained Blackmore. “We are also a member of the IFA buying group which gives us buying  power to order stock at affordable rates than if we just went directly to the supplier as a non-member”. Even ‘ugly’ exhaust silencers looked good glimmering as they hung up side-by-side in the large warehouse awaiting an order.

CUSTOMER RAPPORT
As we continued our tour, Blackmore explained that the store has accumulated over 450 customer accounts and counting with 80 to 90 percent of the base comprising garages and workshops. However, like nearby Wrexham Motoring Supplies, Rollings has kept both existing and new customers at the core of the operation. “Our customers are not just an account number, they are personal and have been with us for 30+ years because staff have built up a great relationship with them” Blackmore replied.

“For example, if there’s something wrong on a customer’s 2009 Insignia, the customer will ring and we will get the parts right and delivered to them quickly first time around. It’s all about customer service and building that relationship”, adding that the branch uses Autocat to track down the necessary components for the vehicle model in question. Surprisingly, the store has even built up a strong rapport with its next-door neighbour ‘Volkswagen Wrexham’ (which despite the name has no connection with LVW). “There is no friction at all”, said Blackmore. “The guys from Volkswagen just come in and collect their parts. There is no competition between us”. 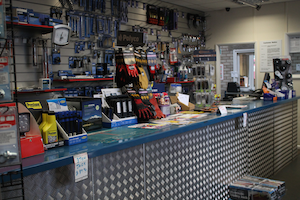 TECHNICAL TRAINING
Vince told CAT that the branch holds a range of technical evenings, presentations and training courses on site for garage customers to keep them abreast of the latest developments. Past courses have covered an array of topics including hybrid systems; oil along with supplier training and ongoing technical talks from companies such as Gates. Blackmore elaborated: “We have constant supplier courses such as common oil training, clutches and we hold technical and presentation evenings for customers in our warehouse space”. We were intrigued to find out what Blackmore had pencilled in for the coming  months. He said: “We recently had a Gates Fan Belt and Tensioner Training course, but the next one will be the timing belt side of it which will take place in the Spring time”.

Before wrapping up proceedings, Blackmore discussed the firm’s upcoming plans, which involves increasing customer retention and organising its ongoing training programmes for the rest of 2017.