MAJOR PLAYERS IN THE MINI MARKET

Simon Jackson and Justin Jeffery explain why stock holding is key to the running of Mini Spares. 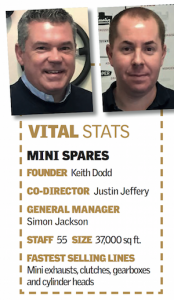 We’re waiting at Mini spares, which differs from the usual display of polish, wheel trims and buckets that usually surround a factors trade counter. Instead, it looks more like a mock-shop showroom as it has an eclectic range of classic Minis on display. Models to note include a 1963 Morris Traveller, a red 1971 Cooper S and a Monte Carlo Mini on display, among others.

While we could stop and stare at these vehicles all day, we had to remind ourselves that the team were busy and we needed to get on with business. With that said, Co-Director Justin Jeffery and General Manager Simon Jackson greeted us, of whom are both old hands in the industry; beginning their careers at the firm as teenagers. Both of them have seen their fair share of changes to the company and market: “When we started at this premises over two decades ago, you could ring up a company and have 10 CV joints sent out to you, and if you ran out, you could easily order another 10.” said Jackson, “For us to do that now, it’s near enough impossible to get a European manufacturer to even begin to talk to us. That’s how everything has changed.”

STOCK HOLDING
To overcome this obstacle, the team relocated from their previous site in Friern Barnet to a purpose-built warehouse that has grown exponentially since first opening. Elaborating on Jackson’s earlier sentiment, Jeffery said, “This was one of the main reasons for moving here. We realised early on that to be in control of your own stock is very important, and to do that, you have to be able to make it yourself.” He continued, “All the grilles, bumpers and corner bars are all manufactured for us exclusively for us. That’s what stands us apart from most competitors where many of them are resellers of product, we actually go out and get it manufactured, otherwise, these cars will go off the road.”

To stock the components, the team has continued expanding the warehouse, with extra storage space and several mezzanine floors. As it currently stands, the space totals 37,000 sq ft employing 55 staff across the factory floor, sales and marketing departments.

In order to maintain its 9500 part numbers and ensure they’re dispatched on time, the team follow a specific process which has boded well for business, as Jeffery elaborates; “We can normally get up to 300 orders on a Monday, anything from small boxes to large packages that have to be shipped internationally. The process we follow is, ‘picking, checking, packing,’ where every order is checked before it gets dispatched, then the guys pack and send it out.”

Although a bespoke stock management system is in place, the Mini Spares team have had to adjust their stock holdings accordingly. Jeffery elaborated, “Typically, brake and suspension products are some items that used to be bought together and would all be in one place within the warehouse, however, our computer system shows us the quickest way to go around and pick wares in the building. We’ve gone away from that, meaning, staff that have been with us for a long time have had to adapt.” He adds that a fair amount of human intervention is needed to get stock holding correct, even though the system is in place.

Jackson agrees with Jeffery’s statement and expands, “Again, how we have to buy things has changed. It’s not feasible to keep certain products together anymore because of the stock holding,” he added, “Where we used to keep 100 items for a certain product line, we now have to hold a 1,000 of them.” To resolve this issue, the team have created a Bulk Storage area, that replenishes shelves as and when required.

PRODUCTS AND EXPORT
Another essential part of the business is sourcing gearboxes and cylinder heads to be sent off for refurbishment. This has led to some new additions that the duo were keen to show us, “Our new alloy five-point cylinder head is a fairly new project, originally made in cast iron”, notes Jeffery, “We have gone out to change, design and improve this product. Filters are another key addition. Everyone used to buy Unipart filters, but Unipart said ‘we’re not doing them anymore’. Luckily for us, we found the original manufacturer and were able to order enough quantity to get them interested in making them again.”

The firm hassate two satellite branches in Birmingham and York, both supplied from the Potters Bar HQ. “It’s the later stuff that’s dropping off the production lines. People are not interested”, said Jackson. “Volumes are too small [for the main suppliers to be interested in] and that’s what we’re now concentrating on.” He concluded.