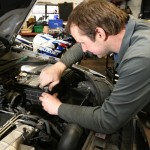 New research suggests that one in three motorists will share a repair bill of some Â£1.6 billion this year. And some drivers will face personal repair bills of over Â£7000.

That’s according to Warranty Direct, which found that a third of the 16 million DVLA-registered driving population will suffer some sort of mechanical breakdown over the next 12 months.

The research suggests that breakdown is most likely to occur for drivers with cars between 3 and 10-years-old.

Electrical faults appear to be the most common problem for garages to fix, with the average repair cost per customer currently standing at just over Â£300.

Data from the study shows that the most reliable car to have at the moment is the Honda Civic, which has just an 8 percent chance of developing a fault.

Garages should watch out for any Renault Grand Scenics on the forecourt though, they have a 61 percent chance Â of breaking down.

Warranty Directâ€™s Duncan McClure Fisher said: â€œThe worst part is the unknown â€“ failure could happen at any time and, unfortunately, as weâ€™re all driving ever more complex vehicles, the cost of repair is reflected.â€