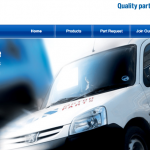 The ALS sites neatly bridge the gap to the 15 Kevin Cooper Motor Factor sites acquired earlier in the year, and now Shah is looking for others in the Exeter area as well expanding in Hampshire, Somerset and Kent.

“It was our strategy to link our branches on that route into Cornwall, so let’s hope we can get a couple more.”

While Kevin Cooper has been rebranded to MPD, ALS will not undergo the same treatment until operations have bedded down.

Shah thinks redundancies are unlikely at ALS, although staff may be redeployed to other locations or into different roles.

He says that ALS was making small loses, not on the same scale as Kevin Cooper which has taken longer to turnaround than originally thought. Shah is confident they will be back in the black in 2014.

“We’re turning the boat around, but it’s a challenging market. It’s been quiet and when that happens people start doing silly things and slashing prices.”

Shah has the goal of 80 branches and turnover of around £75 over the next two years with both acquisitions and new sites, four of which MPD opened in 2012.

“We’re looking at both, but if the perception of the sellers is that the business is worth more than it is it’s likely to be more greenfield sites.

“We’re focussed on the south of the country, so let’s hope we can do the job correctly and make a good profit.”